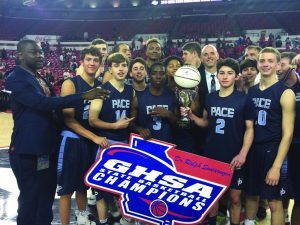 Back to Back: The Pace Academy Knights defeated the Macon County Bulldogs 54-46 at The University of Georgia’s Stegeman Coliseum on Thursday, Feb. 9 to win the GHSA AAA state championship. Pace started out cold concerning shooting and despite getting the double bonus, struggled from the free throw line. The Knights picked up energy going into halftime with points from senior Wendell Carter Jr., junior Isaiah Kelly and freshman Reign Watkins. The Bulldogs installed a physical defensive game plan to guard Wendell, but the 6’10 Duke signee was too much for the Bulldogs, finishing with 17 rebounds and 20 points, many of which came from the free throw line.

In the final minutes, exceptional defensive play from the floor general, senior Mark Sommerville, coupled with Coach Demetrius Smith’s decision to move to a 3-2 zone, propelled the Knights to the win in Athens. “I have always dreamed of being on the varsity team and eventually becoming a starter,” said Mark. “It was a surreal process for me beginning in seventh grade. I have been looking up to so many other people who have played on the team and now I have people saying they see me as a role model. I think of winning two years straight as carrying on their legacy.”

Perhaps the Knights’ best game of the season was the memorable home matchup in the Elite Eight versus #1 Westside-Macon. The Inman Center was absolutely packed with basketball fans from all over the state, including Georgia Tech head coach Josh Pastner, spectating from the bleachers, mezzanine level and indoor track. “I’m not sitting here making excuses, but their crowd was a big-time advantage to them,” said Westside head coach Josh Grube to the Atlanta Journal-Constitution.

Key plays that propelled the Knights to victory were a steal and layup late in the fourth quarter to tie the game from junior Zack Leven, senior Barrett Baker’s 3-point swish from the corner in overtime and junior Isaiah Kelly’s lay in from the left block off an inbound play for a go-ahead basket in double OT. Behind immense energy from the crowd, Pace came out on top with a 53-50 win in their final home game of the year. “Winning that game in front of our home crowd is something I’ll never forget,” said Barrett. “We used that momentum to carry us all the way through the state [championship] game.”

The Knights’ journey to state began in June with summer workouts with Strength and Conditioning Coach Clement Rouviere and extended all the way through Spring Break. The team clashed with fierce competition ranging from games against The Patrick School (New Jersey) that aired on ESPNU and Norcross High School (Georgia), both top ranked within the top 20 in the nation. Throughout competition in region 6-AAA, the Knights were dominant. Their only loss was early on to Cedar Grove High School, but was later avenged in the region championship on Feb. 2. The Knights conclude yet another terrific season under Coach Smith with both region and state championship trophies and an impressive 20-8 record.