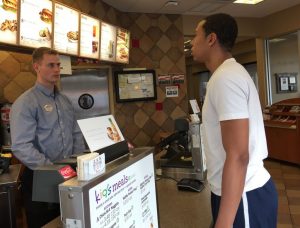 It’s 11 a.m. and you just finished your exam. What do you do? Of course, you go with your friends to get food at the West Paces Ferry shopping center. The fast food restaurants surrounding the center are quite popular among Pace students, but some of these restaurants are very unhealthy. Although delicious, the food served is usually fried, greasy and has tons of calories.

Perhaps the most popular fast food chain in the area is Chick-fil-A. Famous for its chicken, this establishment offers a variety of entrees from chicken sandwiches to biscuits. All of these meals are well-known for being delicious, but people often overlook the overall unhealthiness of most of the options. A classic Chick-fil-A sandwich meal can include 1040 calories or more depending on the drink. Likewise, the 8-count and 12-count Chick-fil-A nuggets meals contain up to 1000 calories. The 4-count Chick-n-Strips meal has up to 1070 calories.

Another preferred fast food chain around the shopping center is McDonald’s. One of the most popular meals at McDonald’s is the Big Mac. The Big Mac meal can contain up to 1170 calories, including french fries and a drink. However, the Big Mac is not the item on the menu that has the most calories. The Double Quarter Pounder meal with cheese contains 1370 calories. The 10-piece Chicken McNuggets meal contains up to 1090 calories, and the Southern Style Chicken Sandwich meal contains 1040 calories.

Steak ‘n Shake, another fast-food restaurant in the area, also serves calorie-laden meals. A Double Steakburger, one of the most popular items on the menu, contains 390 calories. With regular fries, that value shoots up to 830 calories. Steak ‘n Shake is also known for their milkshakes. A large chocolate milkshake contains 950 calories, and ordering that with your meal would push the order well above 1500 calories. A single Frisco Melt contains 750 calories, and the Frito’s Chili Cheese Double Steakburger contains 1060 calories, fries and a drink not included.

According to the United States Department of Agriculture, on average, moderately active women should consume about 2000 calories per day, while moderately active men should consume about 2800 calories. That being said, one meal at Chick-fil-A, McDonald’s or Steak ‘n Shake could easily account for more than half of one’s daily recommended calorie intake.