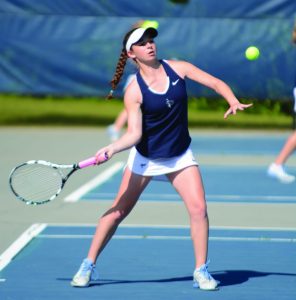 Setting her feet in preparation for the shot, senior Zoe Weitzner catches a glimpse of her desired destination for the ball. Zoe follows through, ripping the ball cross court, sending it flying past her opponent. A perfect winner.

Tennis, one of the more overlooked sports at Pace Academy, might be one of the most successful, after both the boys and girls varsity teams made it to the state finals match last year. In fact, last year was the second year in a row that the boys squad made the championship match.

With the season already underway, both teams are looking to improve on last year’s finishes. “We worked really hard this off-season to make sure we are ready for this season,” said senior Ben Siegel. “We came so close these past two years, so obviously we have high expectations for this season.”

Losing only one player from last year’s team, the boys varsity team returns ten players with varsity experience, including three seniors who have played on the varsity roster since their freshmen year: Prashanth Kumar, Josh Nash and Ben. Along with these seniors, the Knights also return all three of their singles players from last year: sophomore Will Funston (1 singles), sophomore Charlie Hirsch (3 singles) and Prashanth (2 singles).

On top of the returning talent and experience, the Knights have also added three freshmen to the roster: Rojan Jatar, Finn Lamastra and Neil Shasti. To ensure that the freshmen are prepared for matches on the varsity level, they have been playing in some JV matches. This allows them to become accustomed to playing in high school matches and to make sure they are in “playing shape.” Along with the help of seven upperclassmen, these freshmen should be ready to succeed on the varsity level. “I’m expecting the freshmen to have a significant contribution to the team,” said head coach Neil DeRosa. “All three of them have tournament experience, and they are all steady players.”

Unlike the boys team, the girls team lost four players from last year’s state runner-up team. Nonetheless, there are still seven players returning to their lineup, including three seniors: Alyse Greenbaum, Zoe Weitzner and Sophie Zelony. The girls are returning their top two players from last year’s roster: Zoe and sophomore Avi Arora. Their roster features eight very talented and capable players. “We have a lot of talented players who can play doubles and singles,” said Avi. “We want to make another run deep into the state playoffs, and we believe that we have the talent to do so.”

The biggest concern for the girls team right now is replacing Nicole Shafer ’16 at 3 singles. Nicole played varsity all four years of high school, moving around from 1 to 3 singles. Replacing Nicole won’t be easy, but freshman Rekha Sashti seems to be the best fit early in the season. “Rekha will be stepping into our #3 singles spot which was held by Nicole last year,” said head coach Matt Marsico. “Nicole left some big shoes to fill, but Rekha has shown that she has the talent to do it.”

Another factor to keep in mind about this year’s tennis season is that the Knights have moved up a class in GHSA. This may seem insignificant, but the move to 3A means that the Knights are now in the same class as Westminster, a high school tennis powerhouse, and other very talented schools. “We don’t have much familiarity with the teams in AAA, so there are still some unknowns ahead,” said Coach Marsico. “I am confident, though, that if we control what we can on our end, we will be prepared.”