Teachers Have Lives, Too 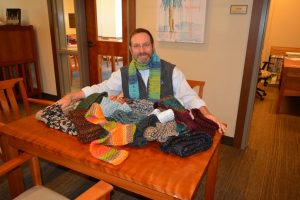 Librarian Mr. Ball displays his colorful scarves which he knits for the homeless. Photo: Eden Kerker

Ever wonder if teachers have a life outside of school? Well, contrary to popular belief, they do. Instead of sitting in front of stacks of papers and tests every weekend, they actually enjoy regular hobbies just like their students. Would you ever guess that geometry teacher Jewell Marable plays the flute in her spare time or that Woodruff Library Director Matt Ball enjoys knitting? Spanish teacher Laura Agront-Hobbs is a new fan of kickboxing and Student Affairs Director Beth Culp has been quilting and sewing for years.

When she was a fifth grader, Ms. Marable’s parents rented her first flute. When forced to pick up an instrument as children, many of us drop the hobby, but Ms. Marable has always loved it and said she had a natural talent for it. “I love classical music and it’s a beautiful instrument,” she said. Ms. Marable believes that since the flute is not as common as some of the other instruments, they may not appreciate how precious the flute really is. “It’s a talent I don’t want to lose, so at least once a week I pick it up and start playing,” she said.

In Mr. Ball’s leisure time, he not only does something he enjoys, but something that benefits others as well. About five years ago, he picked up some yarn and needles and began knitting hats and scarves. “I initially started this hobby because I wanted to do something with my hands while watching soccer,” said Mr. Ball. Every day he picks up his projects and knits when he gets home from school. He then donates all scarves to various homeless organizations. “It’s a hobby that is fun and helpful,” said Mr. Ball.

As a former Olympic athlete, Sra. Agront-Hobbs has always loved working out. The newest addition to her routine is kickboxing. About two years ago, Sra. Agront-Hobbs decided to join her husband in this fun workout. “It’s just something different,” she said. “I just hate running, so it’s my substitution for cardio.” According to Sra. Agront-Hobbs, she goes to the gym to “get her frustration out” about twice a week.

Mrs. Culp has enjoyed sewing ever since she was young. “I started as a child because my grandma did alterations and had me do simple tasks around the house,” she said. “I started off dressing my dolls and have loved it ever since.” About 25 years ago she began quilting, and she has received numerous awards and other recognition for her work. She now needlepoints for her church. She said she loves handwork and almost every day she quilts. “Handwork is a dying art and that’s really saddening,” said Mrs. Culp. “I’m hoping it makes a comeback. If you enjoy a hobby, stick with it. Whether it’s playing an instrument, painting or singing, don’t let your talents and hobbies die out.”