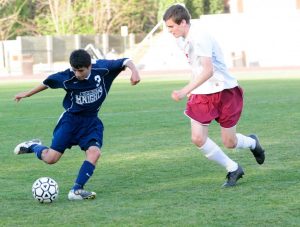 After escaping the Taliban, walking for 10 days from Afghanistan to Pakistan and later fleeing Pakistan and walking for many months to Iran and then Azerbaijan, Sajat Rabbani finally arrived in the United States at the age of eight. Sajat and his family endured unimaginable hardships on their journey, even being held up at gunpoint at the Azerbijan border and forced to give up all their money. Life as a refugee walking hundreds of miles in search of a safer, more stable life is another world from life at Pace Academy in the United States. However, the Pace alumnus and Afghan refugee from the Class of 2013 is no stranger to this extreme transition.

Sajat and his family “lived in Azerbaijan for a year and a half, waiting for [their] chance to make it to America,” he said. They submitted an application to immigrate to the United States, and “after a year of waiting and praying, the government provided the Rabbanis with visas and tickets,” according James Rushton in his story in the Nov. 5, 2010 issue of The Knightly News.

Because some of his family was unable to come to the United States, many had to immigrate to either Germany or England. These family members have had to wait months and even years to get approved to live in these countries.

“Global events have a huge impact on immigration as well,” said Sajat. “My family and I were in Iran when 9/11 occurred and our application for asylum was delayed for a couple of years because of it. We had to go through many more steps to get approval to come to United States.” Stories of immigrants in the United States vary. “It depends on the culture and values of the people that come,” said Sajat. “Of course a certain amount of difficulty is to be expected. Anyone who has ever moved to another country whose culture, language and religion were different could tell you of difficulties they faced. This is a common thing people all over the world experience.”

After attending both Indian Creek Elementary School and International Community School, Sajat found his fit at Pace Academy in the seventh grade. “Pace life was helped by the fact that we were all students,” said Sajat. “We all had the same homework and ate the same lunch, so from that point of view, once everyone is in school, the differences in culture and wealth disappear.” He felt completely embraced by the Pace community and thought that the students and faculty were extremely supportive and understanding whenever he faced challenges.

Sajat’s commute from school was much more difficult than the average Pace student. It consisted of various teachers volunteering to drive him from Pace to MARTA every single afternoon and morning. The trip home on MARTA included two trains and a bus, and walking the rest of the way. “These kind gestures have remained with me as a wonderful memory of some of my teachers,” said Sajat.

Life at Pace was going great, but there were complications when Sajat was trying to get into college. He had very little idea of how the whole college process worked and his parents could not help him much. He had to rely on his college counselor to help him figure everything out. “The most complicated part of it was figuring out financial aid awards, something I’ve had to continue to deal with even in my senior year,” said Sajat. Sajat currently attends Boston College.

“Getting into a really good school, like Boston College is the fulfillment of an aspiration,” said Sajat. “Very few people in the world have such an opportunity, and I consider myself an extremely fortunate person.” He is majoring in political science and will hopefully attend law school after graduation. “I would love to go into government, but I have a lot of loans to pay off so I have to get that sorted as well,” said Sajat.

Although his family members are sad he is so far away from home, coming from such a tough situation in Afghanistan they are extremely proud of all his accomplishments. “The education I received is not something I have ever taken for granted,” said Sajat. “I grew up going to Pace, and a lot of my own character can be traced back to my experiences during my time at Pace. I am always proud to say I attended Pace Academy.”