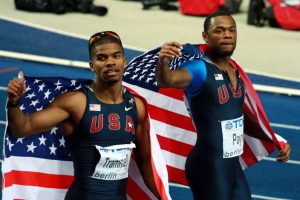 The Olympic Games and the chance to represent one’s country at the most elite stage of competition are a dream come true for any athlete. This dream became a reality for Pace’s newest addition to the track and field coaching staff, Terrence Trammell. Coach Trammell is an Atlanta-born Olympian who placed second in the 110-meter hurdles event during the 2000 and 2004 Summer Olympics. He also placed second in three International Association of Athletics Federations (IAAF) World Championships for the same event in 2003, 2007 and 2009. Coach Trammell reached the Beijing Summer Olympics in 2008, but he had to pull out of his event due to a hamstring injury in the preliminary rounds.

Coach Trammell graduated from Southwest Dekalb High School in Atlanta and was named the 1997 Track and Field News Male High School Athlete of the Year during his senior year. In the same year, he tied the national record for the 60-meter hurdles during the Georgia state championship. He attended the University of South Carolina for track, where he became a six-time NCAA champion.

Coach Trammell made his first Olympic team at the age of 21, bringing home the silver medal in Sydney, Australia despite his young age. “My favorite was the 2004 Olympics in Athens,” said Coach Trammell. “The atmosphere was just electric.” This electric atmosphere contained approximately 103,000 people and millions of television viewers around the world. It was at those Olympic games that Coach Trammell realized exactly what his goal was and how he was actually living it.

Coach Trammell is no doubt a phenomenal athlete, but he’s also an exceptional coach to the short-distance runners on the Pace track team. “He is really hardcore and he has a strict regimen, but it’s because he wants us to be our best,” said junior Cameron Perchik. Coach Trammell also runs with the track runners from time to time to show specific techniques.

Coach Trammell is not only a retired athlete and coach, but also a fashion designer. He designed the uniforms for the Guinea women’s track team in the Beijing Olympics in 2008. “My mom used to make some of my uniforms when I was growing up,” he said. “And I think that’s how I got the affinity for athletic apparel.” After pulling out of the Beijing Olympics due to injury, Trammell’s shoe company did not renew his contract. He continued to compete internationally for four more years, placing second in the 60 metre hurdles at the IAAF World Indoor Championships in Dohar, Qatar in 2010 before retiring. He now spends his time with TRAMMELL Athletics, a company he owns that trains young student-athletes who want to compete in college for any sport.