Gymnastics Leaps into Another Season 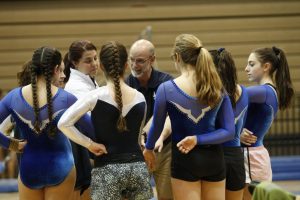 Coach Cunningham gives the team a pep talk before the start of a meet last year. Photo: Pacesetter

Placing her grips delicately on her hands and covering them in white chalk, senior Katy Leitz prepares for her bar routine. Anticipating her liftoff, she eyes her target and takes a deep breath. She runs and grasps the bars, gliding through the air as she circles the bars and hops from one to the other.

Gymnastics season has arrived, which means that gymnasts from all grades will push themselves to test not only their strength and balance but their mental limits as well. “Gymnastics is not only a physical sport,” said junior Hannah Schrager. “What a lot of people don’t realize is that there is a big mental aspect to it.”

Although their first meet is not until March 15 at home against Ola High School, the team is already working hard. Even at such an early point in the season, it has proved to be strenuous, with daily practices including running, conditioning and polishing the team’s skills in two of four events. Practices are five days a week, with an optional one on Sunday, which means that the team works hard all week long and the gymnasts are really dedicated to their sport. However, these difficult practices pay off as the team shows improvement from the start of the season to the end.

The team is off to a promising start with seniors Emma Downey, Molly Jacoby and Katy coming back for their last season. Although there is not a formal captain, all of the seniors have taken a role of leadership on the team and are always willing to help out their younger teammates.

Some of the new faces for this year are freshmen Alexa Levine and Hayden Sample, who are already stepping up and showing off their skills. “Even though this is my first year participating in gymnastics at Pace, I already feel well assimilated with the team,” said Alexa. “I think the team balances each other well because we all know each other’s strengths and weaknesses.” Hayden will compete as an All-Around, someone who participates in every event, while Alexa will compete as a specialist in a certain skill.

Coach Steve Cunningham is returning for his 36th year coaching gymnastics with big hopes for this year’s team. His goal for the team is for the girls to score 95 points or higher this season. “I really like how Coach Cunningham has been my coach for gymnastics since middle school,” said Hannah. “He has taught me so much and I have definitely improved throughout the years.”

Although gymnasts compete individually and gymnastics is not typically seen as a team sport, Coach Cunningham is very focused on the team aspect and what the girls can accomplish together. “I enjoy the closeness of the team. They work hard and are very supportive of each other,” he said. “I enjoy watching the girls light up with excitement when they or their teammate learns a new skill.”