Don’t Trust Everything You Read, Hear 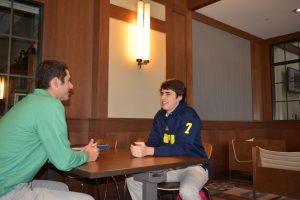 In his first month in office, President Donald Trump signed 12 executive orders, almost all of which have created some sort of controversy. These orders are not the only subjects of dispute, however, as Trump’s counselor Kellyanne Conway brought a new term to the media’s attention: “alternative facts.”

Immediately following these false declarations, reporters began to challenge Spicer. “Don’t be so overly dramatic about it, Chuck,” said Conway to NBC’s Chuck Todd on “Meet the Press.” “You’re saying it’s a falsehood… Sean Spicer, our press secretary, gave alternative facts.” Merriam-Webster noticed a spike in the number of people looking up the word “fact” after Conway’s description of false statements as “alternative facts.”

This was not Conway’s only gaffe. On Feb. 3, Conway claimed that the city of Bowling Green, Kentucky was the scene of a massacre carried out by Iraqis posing as refugees. She was appalled that the U.S. media had not covered the massacre along with other acts of terrorism. However, there was a significant reason as to why this so-called massacre was not publicized: it did not exist.

“What does it mean when [Donald Trump] says words?” asked CNN reporter Zachary Wolf. Over the past month, Trump has frequently tweeted about how The New York Times, ABC, CBS and CNN are creating “fake news.” He even declared that these media institutions are “the enemy of the American People!” through his Twitter account on Feb. 17. But while he declares that American news sources are feeding the people lies, he and his advisors are declaring alternative facts left and right.

So, how do we know what is actually real and what is fake? The best thing to do is fact check. Don’t believe everything you hear or read. PolitiFact.com is an independent, non-partisan fact-checking website created to “sort out the truth in American politics,” according to the organization. The site is easily searchable by people and by topic and includes scorecards for individuals. Currently, PolitiFact rates 69% of statements made by President Trump as “Mostly False, False or Pants on Fire.”

In a perfect world, everyone would have some degree of media literacy. But based on a recent study released by Stanford University, most people do not. Beyond fact-checking, people can check the domain and URL of websites, paying particular attention to sites with URLs ending with .com.co, which may not be legitimate. Read the “About Us” section of websites, look at quotes in news stories, including who said them and what legitimate experts may be missing from the story, and check the comments.

Many online news outlets, such as The Onion, exist to satirize current events. However, some people share stories from these sites after interpreting them literally. If you see someone doing this, save them the embarrassment and tell them what they’ve shared is not real. Everyone has to do their part to fix the fake news problem.