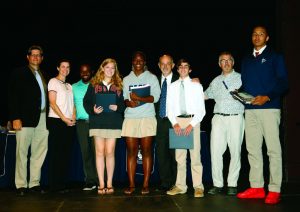 Why do all of the awards seem to go to the same group of kids? Many students wonder this when awards season arrives each year. Various assemblies are spread throughout the spring calendar, from National Honors Society and Orkin-Cum Laude to Activities and Honors Days, recognizing upper schoolers for their accomplishments. With so many assemblies and a diverse range of student achievements, a considerable number of students should ideally receive recognition, but many claim that awards only commend a small fraction of the student body. The perception is that certain students win multiple awards over the years, while others feel unrecognized and frustrated.

In reality, the awards process is quite complex and aims to recognize as many individuals as possible. Some awards are determined by specific groups of faculty members, such as departmental awards and athletic awards, whereas others are voted on by the entire upper school faculty. Students can gain multiple awards, but never from the same group. The main process begins with an online ballot created by history teacher Emily Stevens, that teachers are “strongly urged to participate in.” The lists for each award contain all students who are eligible for earning the awards, as some of these awards have GPA requirements. Students who have been given a guilty verdict from the Honor Council are not eligible for any award within the academic year.

The online ballot involves approval voting, “which means that you vote for every student that fits the award,” said Ms. Stevens. After the results from online voting are analyzed, the faculty meets to pair nominated students with the available awards. At this meeting, teachers speak on behalf of the top candidates, often sharing why they think a certain student deserves to be recognized. Faculty are urged to only share positive traits of the nominees. “It never goes straight from the [online] ballot to the slate of who we’re giving awards to immediately,” said Ms. Stevens.

Teachers involved in voting may only know a fraction of the students being nominated, so by advocating for worthy recipients, all of the faculty can vote for individuals that they feel best deserve the award. This component of the process used to be “divisive and acrimonious,” according to Ms. Stevens, but has evolved to steer away from negative stories about students and stay constructive.

Faculty voting leads to a rough slate of awards recipients after these notoriously long meetings, which often run between two and three hours. These lengthy meetings are followed by shorter meetings that summarize the slate for faculty who were not able to attend the duration of the meeting or who could not attend at all. After the whole faculty approves the award recipients, Head of School Fred Assaf has a final say in the process.

At its core, the awards system simply seeks to identify who stands out, and recognize them. But how many awards should Pace have? Many categories have been added, but university “book awards” and memorial awards established by families are out of the faculty’s control. Pace has many talented students deserving of recognition, but the administration can only highlight a portion of them. This may be considered unfair, but if everyone who was above a certain benchmark, say a certain GPA, were to receive an award, there would be too many awards to give out.

The senior class recently learned that the graduation ceremony garb would be altered for their class. All students will now wear bibs with their graduation gowns. Bibs with a different cording on them will be worn by students who are in the top 20% of the class, rather than the old policy where students with a GPA of 90 or higher wore sashes. If this policy had not been changed, up to 80% of the seniors could have qualified, which would have only distinguished the students without sashes.

It can certainly prove frustrating to believe that you or a classmate deserves an award and then watch the top students in your class get multiple awards while you or your classmate receive none. Awards are particularly desirable to list on a college application, and the number of awards offered significantly increases from sophomore to junior year. Most recipients are the kids who are already at the top of the class and thus have their GPAs to help them, while the students who may need an award to level out their academic performance have lower GPAs and thus may not qualify for these awards.

This does not mean that students are doomed if they aren’t in the highest percentiles, though; there are still character, service, friendship, athletic and activity-related awards. Ms. Stevens adds that students are welcomed to suggest their ideas to make the awards process as inclusive as possible.

There appears to be no way to revamp our awards system and make it 100% fair, but the faculty is constantly revising the process to get as close to perfection as possible. Yes, sometimes a group of students seem to collect a disproportionate amount of awards, but the faculty is still rooting for all students. The teachers truly want to recognize their students who are above and beyond. If you have ever felt excluded by the awards system, here are a few things to keep in mind: