Break Out of Buckhead this Spring 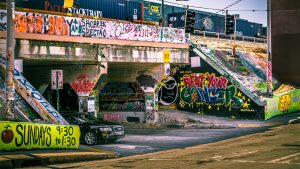 Hop in the car and take a ride on the wild side with these suggestions. Pictured is Krog Street Tunnel in Inman Park. Photo: Flickr

Feeling curbed by the Buckhead bubble? Pop outside of your comfort zone and explore all of what Atlanta’s diverse districts have to offer. From Decatur to Roswell, this is your guide to breaking out of Buckhead this spring:

Hike Sawnee Trail to Indian Seats: Shoot up I-85 to Sawnee Trail for a relaxing hike with friends. (WHAT EXIT? HOW FAR AWAY?)

Southern Trilogy: Barrington Hall, Bulloch Hall and Smith Plantation are three of Georgia’s Civil War era gems. Full of history and exquisite architecture, these Roswell museums give a glimpse into Georgia life in the 1800s.

Sweetwater Creek State Park: Providing a marvelous peek at Atlanta’s Midtown skyline, the miles of hiking trails at Sweetwater Creek Park are  a perfect spot to break out and get some exercise. Lose yourself in breathtaking forests and ruins on this escape to Lithia Springs.