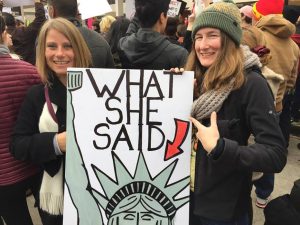 An estimated 3-4 1/2 million people in the U.S. took the world by storm on Jan. 21. They marched for equal rights. They marched for representation, but most importantly they marched to be heard. While Trump’s inauguration sparked the uproar, the President is but one of these marchers’ concerns. From women’s rights and immigrant rights to marijuana legalization, Americans continue to organize protests to incite national change.

This change is not limited to progressives. On Inauguration Day, some viewers witnessed the swearing in of their President with blunts in hand. The #Trump420 lit up in solidarity with the President but with the intention of shedding light on marijuana legalization. The annual March for Life, a protest denouncing abortion, took place the weekend after the Women’s March. Posters in hand, and voices on full blast, these anti-abortion activists flooded Washington, D.C. Most recently, people from many political perspectives joined forces to boycott the immigration executive order deemed the “Muslim Ban.” While many are welcoming the emergence of new activists, the country as a whole is left wondering “what’s next”?

For school counselor Kacy Brubaker, these marches have been a stepping stone in her advocacy journey. From preaching in church to contacting her local representatives, Ms. Brubaker has passionately devoted herself to immigration, children’s issues and women’s rights. And while she appreciates the wave of new energy, she has urged new advocates to learn from their predecessors.

The true issue at the heart of these movements is engagement. While the staggering numbers of recent marches have been impressive, the groups must work on retaining members and sustaining momentum over the long haul. More marches are planned, including the Tax March on April 15, meant to force the President to release his federal tax returns; the March for Science on Earth Day, April 22; the People’s Climate March on April 29 and the National Pride March in support of LGBTQ rights on June 11. All will be held in Washington, with sister marches around the country, including Atlanta.

Citing the the First Amendment, citizens have exercised “the right of the people peaceably to assemble, and to petition the Government for a redress of grievances.” After the immigration executive order, thousands of Atlantans banded together at Hartsfield-Jackson Atlanta International Airport on Jan. 29 with posters in hand. The demonstrations were nationwide, with large and vocal protests at airports and on city streets, along with a strike by taxi drivers in New York, who refused to complete any rides from airports that day.

But contrary to popular opinion, these marches, protests and other initiatives focus less on protesting Trump, and more on protecting Americans’ freedoms. Marginalized groups feel under attack. The people have spoken, and they want the President and Congress to answer their grievances.