The 89th Academy Awards Tip Off on Sunday 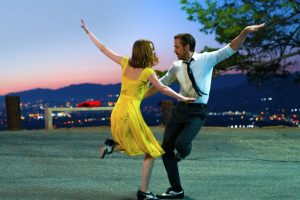 “Lalaland” is predicted to win the most Oscars this year. Photo: lalaland.movie

The 2017 Oscars, hosted by Jimmy Kimmel and televised by ABC, will be held on Sunday, Feb. 26 at 8 p.m. The lineup of nominated movies is somewhat different this year in comparison to previous years. Many of the nominated movies were not big blockbusters, such as “Doctor Strange,” but rather films without huge advertising budgets that did well in art houses.

The Best Actor nominees include Casey Affleck in “Manchester by the Sea,” Andrew Garfield in ”Hacksaw Ridge,” Ryan Gosling in “La La Land,” Viggo Mortensen in “Captain Fantastic” and Denzel Washington in “Fences.” It is undisputed among critics that Casey Affleck had the best performance in “Manchester by the Sea,” but Affleck has faced sexual harassment allegations in the past that could impede his ability to win the award. If Affleck does not win the Oscar, then Denzel Washington will most likely win for his powerful performance in “Fences.”

The nominees for Best Actress are Isabelle Huppert in “Elle,” Ruth Negga in “Loving,” Natalie Portman in “Jackie,” Emma Stone in “La La Land“ and Meryl Streep in “Florence Foster Jenkins.” Emma Stone, acting as the heart of “La La Land,” has been praised for her incredible acting in the film. Stone is the predicted winner but Isabelle Huppert won the Golden Globe for her performance in “Elle.” She is the sleeper candidate for the Oscar and she is praised for her portrayal of a complex psychological character.

The nominated actors for Best Supporting Actor are Mahershala Ali in “Moonlight,” Jeff Bridges in “Hell or High Water,” Lucas Hedges in “Manchester by the Sea,” Dev Patel in “Lion” and Michael Shannon in “Nocturnal Animals.” Out of all of the categories this year, Best Supporting Actor arguably has the most dynamic and close competition. Different media outlets and critics each predict different nominees to win the Oscar, but Ali and Hedges appear to be the top contenders.

Best Supporting Actress has the least competition out of any of the Oscars this year. Viola Davis in “Fences,” Naomie Harris in “Moonlight,” Nicole Kidman in “Lion,” Octavia Spencer in “Hidden Figures” and Michelle Williams in “Manchester of the Sea” have all been nominated. Although all are worthy candidates, Viola Davis will most likely win the award for Best Supporting Actress for her performance in “Fences.” Davis has been nominated for two Oscars in the past two years, and her performance in “Fences” was stellar.