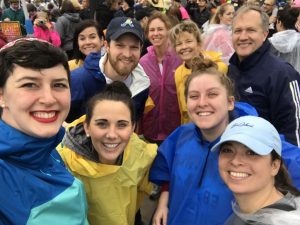 Over 5 million people worldwide and 1 million in Washington, D.C. marched on Jan. 21 to make their voices heard. Police estimated that over 60,000 people marched in downtown Atlanta alone. But the march did not stop there.

The Women’s March on Washington launched a new campaign following the successful march called 10 Actions/100 Days. Over the span of the first 100 days of Donald Trump’s presidency, the organization is posting a new action on their website every ten days for people to tackle. This campaign is not only for women; it is for anyone who wants to speak out about their struggle, whether it be political, social or economic. Those who did not get to march on Jan. 21st have not missed their chance to take action.

The campaign’s first action was to write a postcard to senators about whatever issue you are most passionate about. The website gives examples of topics to write on, such as gender-based violence, reproductive rights, LGBTQIA rights, worker’s rights, civil rights, immigrant rights, religious freedom and environmental justice. The website has a link for free printable “Hear Our Voice” postcards, but a personalized letter works just as well. There is also a link to type in your zip code and find your senator’s’ phone number and office address.

On Feb. 2, the campaign launched their second action: “Huddle,” which gives people the chance to get together and chat face-to-face with others about the issues they may have outlined for their senators. On the website, there is a link to type in your zip code and find events close to you to which you can RSVP.

There is a video on the website to watch what each group envisions for the world in the next four years “in which freedom, justice, human rights and democracy are held sacred rather than threatened.” The campaign suggested for the huddles to write a group letter to their senators opposing President Trump’s nominees, such as Betsy DeVos (Education Secretary) and Jeff Sessions (United States Senator).

“We’ll visualize what a more democratic, just, safer and freer world could look like four years from now — and we’ll work backwards to figure out what we need to do, starting today, to get there.”

The campaign also launched a #NOBANNOWALL hashtag pushing back on President Trump’s executive orders. The thinking is that if people continue to show opposition to these Executive Orders, they can impact change. The website gives all of the senators’ twitter handles to tag them in a photo using the hashtag.

On March 8, International Women’s Day, the Women’s March campaign will observe A Day Without Women. They urge everyone to question whether their workplaces strive for gender equality or if they support policies and leaders that perpetuate oppression.