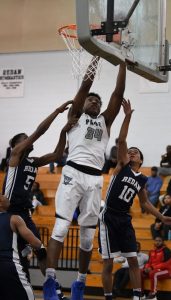 Varsity boys and girls basketball had stellar successes in the Region 5-AAA tournament and both teams are advancing to the state tournament. The boys are region champions for the third year in a row, while the girls are the region runners-up after a 39-55 loss in the championship game to Redan High School.

“We are special because we are a mature group of veterans,” said Assistant Coach Pete Pope. “We trust our preparation, our team culture and our process to yield the best results.” The players feel really good about their play going into the state playoffs. “I feel confident about making another run like last year,” said senior Mark Sommerville. “We have four returning starters, which is why we’re doing so well now. Our chemistry is amazing.”

The varsity girls basketball team has a record of 13 wins and 11 losses going into the state playoffs. In region tournament play, the girls dispensed with Westminster 47-38 on Feb. 7 and went on to defeat Cedar Grove 47-44 on Feb. 8 before heading into the region championship game against Redan on Feb. 10.

Head Coach Troy Baker and Assistant Coach Joe Sandoe have been analyzing footage of their first opponent in the state playoffs, North Hall High School, and are focusing on getting their team healthy and mentally prepared. They are working on two keys to success in the games: getting more rebounds and limiting the number of rebounds so that the time that the Knights have the ball really counts.

Coach Sandoe feels that they have no single super star who is responsible for their wins, but it is the team’s trust and synchronization that has made the difference. “I think that we have really come together as a team and if we believe in each other, then we can beat anyone,” he said. The players are also feeling optimistic going into the state playoffs. “Our team’s versatility, defense, and mental toughness could take us very far in the state tournament,” said senior Julia Ross.

The first round of state playoff games are on Feb. 18 in the Inman Center. The girls play at 2:30 p.m. against North Hall and the boys face Dawson County at 4 p.m.