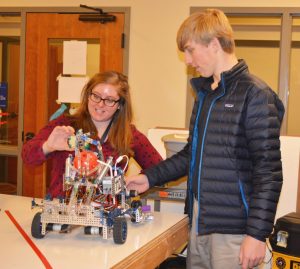 The upper school robotics team heads to the Georgia FIRST Tech Challenge state championship on Saturday, Feb. 18. at Clayton State University. The qualifying matches are from 11 a.m. to 5 p.m. and elimination matches will follow, capped by an award ceremony. The upper school Roboknights won their spot at the state championship by ranking sixth out of 34 teams, also winning the Control Award for innovative thinking. In addition to these achievements they placed third in the Rockwell Collins Innovate Award Competition.

Sophomore Sophie Beck and senior Seth Swiecichowski, the Roboknight team members who qualified for state, are busy getting ready. Usually, the team meets during E period and on some Saturdays. Now, they’ve been meeting at least twice a week solely to prepare for the competition. “We hope to place in the top half of the teams at state,” said RoboKnights coach Brianna Korb. “We are making lots of changes and we hope this will affect our score in a positive way”.

Sophie and Seth have been working on their robot since September and are perfecting it by getting the robot to complete the following functions: push a button after reading if the color is red or blue, shoot balls into a goal and collect the balls. They are still working on getting the robot to pick up a large ball with a 29 inch diameter. The duo plays off each other’s strengths and collaborate well. Sophie does the programing while Seth does the building. They both work together on how the robot should look and what it should be comprised of. Their robot must have the proper controls, motors and matrix parts to function properly.

Of course, coding is very important for a robot as well, and Pace’s team uses autonomous programs (programs that don’t need human interaction to run). “This [the autonomous programming] is rare, and it’s ultimately what has helped us advance to the state championships,” said RoboKnights coach Christina Snyder.

The robotics team builds three to four robots per year, disassembling them to make new ones. The team builds creative robots like Bruno, Mrs. Korb’s favorite, who is designed to run on candy.

Pace’s robotics team is different from those at many schools. For instance, Pace offers actual classes dedicated to robotics. The robotics team also hosts build days for other schools where other teams can come to Pace and practice with their own robots. Not everyone who takes robotics must compete but some students enjoy it. “I like robotics because you are challenged to solve simplified technical problems that are real world issues that robots could be used to solve,” said Seth.