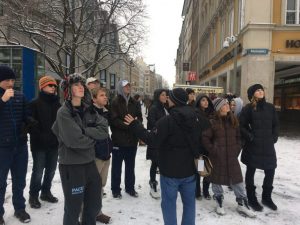 Arriving in the beautiful city of Munich on Jan. 8, Pace students began their ICGL trip to Germany with a snowy walk to Marienplatz, the city’s main square. Led by history chair Tim Hornor, Stewardship Manager Liz Wiedemann and math teacher Jason Smith, 14 juniors and seniors spent Jan. 8-16 learning about “Old” and “New” Germany. The first day included a tour of the Munich Frauenkirche, a Catholic cathedral, and a dinner at the Hofbräuhaus, where classic German meals are served. “When arriving on the first day, I already knew this would be one of the best experiences of my life,” said senior Sophie Zelony. “I could not wait for the rest of the trip.”

On Monday the crew boarded a train for the Neuschwanstein Castle, a nineteenth-century Romanesque Revival palace. “It was like nothing I have ever seen before,” said senior John Propst. “It was far from anything one would ever see in Atlanta and it was an amazing experience going through the Alps.”

A walking tour guided by Mr. Hornor was the next stop for the students on Tuesday morning. Later that day the group visited the Antikensammlungen and Alte Pinakothek museums followed by a scrumptious German dinner at Spatenhaus and the opera. “I hate the opera but seeing ‘Carmen’ was a eye-opening event that I never knew I could love so much,” said senior Zoe Weitzner. The following day the group visited the Dachau Concentration Camp, where they endured a painful, yet educational tour.

Thursday was the group’s first full day in Berlin where they walked to the Potsdamer Platz, the Berlin Wall and Berlin’s Holocaust Memorial, a memorial for the murdered Jews of Europe. Later they visited the Brandenburg Gate and the Reichstag Building, a historic building constructed to hold the Imperial Diet of the German Empire.

Friday was referred to as “museum day” for the students. They visited the Berliner Dom, the Pergamon Museum, Neu Synagogue, and the KaDeWe, Berlin’s premier luxury retail destination. Their weekend was also filled with learning including a visit to The Topography of Terror Museum and Hitler’s Führerbunker. Finally on Sunday they walked to Sans Succi, the palace of Frederick the Great, and had their last meal before leaving on Monday. “Overall the trip was a success,” said Sophie. “I could not have asked for a better group of students and teachers. They enhanced the trip to make it better than I could even imagine.”