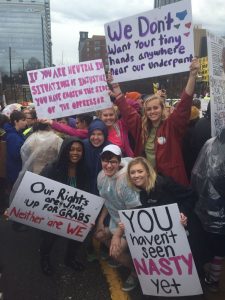 On Jan. 21, one day after Donald Trump’s inauguration, 500,000 people marched for women’s rights in Washington, D.C. Sister marches were held in cities all over the world and on all seven continents, from Atlanta to Auckland, New Zealand. The Women’s March on Washington, including its sister marches, drew an estimated 3 – 4 1/2 million marchers in the U.S. and between 270,500 to 314,300 people internationally, according to The New York Times.

The march aimed to send a message to the world on the first day of America’s new government that women’s rights are human rights. March organizers set forth a comprehensive platform of unity principles that included women’s reproductive rights, LGBTQIA rights, civil rights, immigrant rights and environmental justice, among other principles.

It was an opportunity to come together with other individuals and communities who want to ensure that the rights of all people are recognized and protected. Marchers included every manner of people, of different genders, faiths, cultures and sexual orientation, because the march sought to include a large, diverse body that couldn’t be ignored. March organizers wanted it to be a peaceful march, although some marchers said that they can’t achieve peace if there is no justice and equality for all people. Some of the participants also marched for the sake of just being present, and to make their voices heard.

Words have always carried tremendous power behind them and some people feel that lately words have taken on a kind of negative power, including Director of Communications Caitlin Jones. “A lot of language that has been thrown around recently challenges the rights of everyone,” said Mrs. Jones, “and my response is to counter negative words with positive words, and I think this march communicates a positive message.” Mrs. Jones marched with friends and family members in Washington.

There were many Pace faculty members and students who attended the Women’s March in Washington and Atlanta. One Pace faculty member, counselor Kacy Brubaker, made the trek up to Washington, D.C. to make her voice heard. “As a woman, there are some things about the incoming president that I disagree with,” said Ms. Brubaker. “As a white woman born in the U.S., I am not threatened by a lot of things, but immigration is a threat to me because of my loved ones who are going through the immigration process.”

People marched for a variety of reasons. For example, they wanted to raise awareness for certain rights that women should be guaranteed or even to protest the new president. Pace alumna Payton Gannon ’16 marched not only because feminism is an important part of her life, but because protecting Planned Parenthood is an issue of concern to her. “Reproductive rights are important to me because women have to have bodily autonomy to truly control their own lives,” said Payton. “Planned Parenthood helps so many people every day and I am afraid that the government might defund it.”

Freshman Sandy Lum also attended the Women’s March in D.C. Waking up at 7 a.m. to get on the Metro, she had to wait for four trains (because of the crowds) until she could get on safely. Despite all the hassle to get there, Sandy thought the march was a life-changing experience for her. “It was amazing to see people of all ages, religions and races together in one place raising awareness for what they believe is right,” said Sandy. “Everyone who attended each had their own reason for being there.”