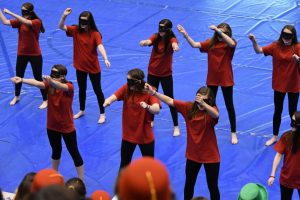 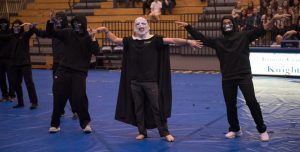 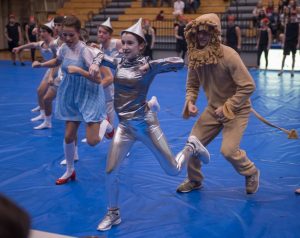 Sophomore Gillian Weitzner stole the show as the Tin Man from “The Wizard of Oz.” Photo: Laura Inman 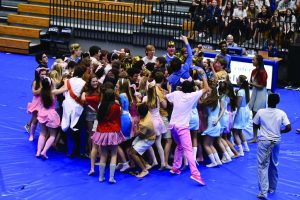 Every year, freshmen are only given $500 to spend on Spirit Week. They have the difficult task of allocating their small budget across decorations, banner and costumes. The Class of 2020 underachieved with their decorations this year, only using paper cutouts in the gardens between the Inman Center and the Arthur M. Blank Family Upper School. But in their defense, this is the most difficult area of the Upper School to decorate, as students never know what to expect with the weather.

Expectations for the freshman performance during Spirit Week are never set high, but this class exceeded expectations with a clean intro and simple yet cute costumes for their theme, “The Incredibles.” Although the big group formations were incoherent, the choreography was pretty together.

Freshman Ben Crawford’s bottle flip was so close, and it was still a creative crowd pleaser even though it failed. One of the favorites of the freshman dance was the battle scene between Syndrome and the Incredibles. Freshman Blake Maner (Syndrome) got the whole school cheering in the battle dance, making it a crowd favorite. Overall, the freshmen did a fine job.

Five hundred dollars is added to the class budget each year for Spirit Week, allowing the sophomores to create more intricate decorations and costumes with double the money they had the year before. The Class of 2019 decorated the cafeteria with bright colors to replicate the city of Oz. The most creative aspect of their decorations was probably the duct tape “yellow brick road” near the back of the cafeteria.

The sophomores opened their dance with originality, creating a “tornado” with the leads lifting and spinning sophomore Emily Pulver (Dorothy) in the middle. They did a terrific job of telling the story of “Wizard of Oz” with impressive choreography and clean formations. A few highlights from this dance were sophomore Max Creasman’s toe touch and Gillian Weitzner’s Tin Man isolations. As a class, the sophomores were the most together and in sync with their choreography.

The Class of 2018 transported their peers to the wizarding world of “Harry Potter” for Spirit Week. Walking through the Inman Center was like walking through the Hogwarts School of Witchcraft and Wizardry. Colorful banners and flags represented the four houses of Hogwarts, and painted signs depicted famous scenes from the books and movies. Even though the decor slowly deteriorated throughout the week due to students being students, Inman was still a magical experience.

The reigning Class of 2017 brought the school back to the times of princes, princesses and magical creatures with their final Spirit Week theme of “Grimm’s Fairy Tales.” Careful to keep their theme a secret, they stayed up the whole night before Friday in order to execute all of their decoration plans. Pace faculty, staff and students arrived at school that Friday morning to find elaborate, whimsical portrayals of all of their favorite fairy tales. The second floor of the Upper School depicted various stories, like “Snow White,” “The Three Little Pigs” and “The Little Mermaid.” Colorful streamers and cardboard castles were placed around every corner.

The senior banner contained images from the classic fairytale scenes from “Cinderella,” “Little Red Riding Hood,” “Goldilocks and the Three Bears” and “The Three Little Pigs.” When it came time for the senior dance on Friday afternoon, Molly Levine (Little Red Riding Hood), Carson Myers (Fairy Godmother) and Ben Siegel (Papa Bear) performed a truly magical show. The Class of 2017 has a reputation for impressive Spirit Week skits, so it was no surprise when “Grimm’s Fairy Tales” took first place.