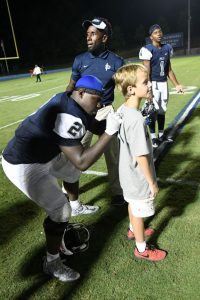 Although mostly seen for his football side, Realus shows his affectionate self.
Photo: Fred Assaf

If you’re looking for a date on Feb. 14, look no further than junior Realus “Booman” George. Whether it’s dropping bars on Soundcloud or laying the hammer on the football field, Realus can be your dream date.  Although Realus’ hard-hitting reputation may precede him, he can be your “boo” for Valentines. His exuberant personality and constant jokes have distinguished him over all the other available men at Pace Academy, making him the most eligible bachelor at Pace.

Our bachelor likes to spend his time playing “NBA 2K” and “Madden” on his Xbox, and stays active by working out and grinding on the football field. “I need to stay in shape for football, but treating my girl to a movie and dinner is just as important to me, no doubt,” said Realus. Although “Booman” is known for his famous rap sensation “X-Files,” his musical appreciation extends to many genres that make an appearance on his playlist. The soundtracks to his life are “Big Rings” by Drake and Future and “The Climb” by Hannah Montana. “People don’t realize how big of a fan I am of country music, especially Corey Smith’s ‘I Love Everyone,'” said Realus. “Whatever genre she wants to listen to, I will listen along with her.”

Booman claims his romantic side is the most overlooked part of his persona. “My ideal date would be going to a Falcons game then a meal at Mary Mac’s, but on special occasions, like Valentine’s Day, I would treat her to something more special,” said Realus. As a standout athlete, Realus is in search of a fellow athlete to share the evening. “Beyond her being an athlete, I don’t have a specific ideal in my head, but I will know when we are together,” said Realus. The most important aspect for Realus is to find a woman whose open for a romantic and fun night with “StewBoo.”

His past Valentine’s Day nights have usually been spent playing Xbox, but Realus feels confident that this year will be different. “My wingman and fellow bachelor [junior] Delvalo Baitey will be out to find young love for the both of us this year,” said Realus. “We are both ready to treat our girls for the best Valentine’s Day of their life.”