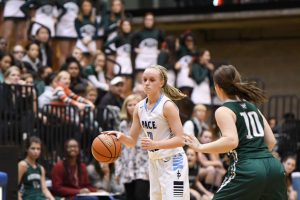 While some students were off playing in the snow or tanning on beaches during winter break, the girls varsity basketball team was working hard in the gym to prepare for the Campbell High School Christmas Tournament. They took the first week of break off so the girls could travel and vacation with their families, but they were back in the gym Dec. 26 to practice for three tournament games. The girls left the tournament with one win and two losses under their belt, with more players around during the break than there have been in previous seasons.

The team got off to a fair start with a 4-4 win-loss record before entering the tournament. The first half of their season included many close losses. According to assistant coach Joe Sandoe, it has made the team more ‘battle-tested’ because they gain more experience with every game. “It helps that the girls have really good chemistry,” said Coach Sandoe. “Anytime you have good chemistry on the team, it spills onto the court.”

As the team enters the second half of the season, they have a good grip on what to expect with teams they have already played, in some cases. Since this is the first year that Pace is playing in 3AAA, the team has played a lot of schools that they have never seen before. But now as they enter the last leg, they have more knowledge to work with.

“We saw a lot of improvements in skill and chemistry, so the latter half of the season should turn out better than before,” said Coach Sandoe. The team now has a 5-6 record and the majority of the losses were well-fought. “I think we could win region because both of the region games we lost have been in the last minute,” said sophomore Joelle Zelony. “We can definitely go far in the state tournament.” The girls had lost two league games and won two before winter break.

“Every returning player has matured and we have gained lots of talented freshmen,” said senior McKenzie Baker. This talent and hard work was evident in the Knights vs Wildcats game on Dec. 9. The girls played well but lost to Westminster in a tough match 33-34. Westminster is a known Pace rival, and it might even surprise some people that Pace only lost by one point, but this girls’ varsity team has been improving on both their team dynamic and their skills to make the best out of play with tough opponents.

The second half of the season is looking very good for the girls, as they beat the #1 team in the region, Redan, 43-38 when they traveled down to the Stone Mountain area on Jan. 25. To keep their winning streak going, sophomore Kayla Ross made a buzzer-beater to beat the Lovett Lions on Jan. 27, improving their win-loss record to 10-9.