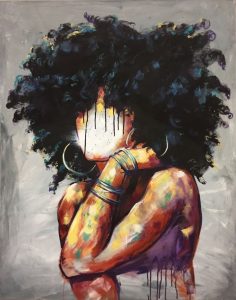 Recently, visual arts teacher Donice Bloodworth traveled to Miami for the 7th Annual Bombay Sapphire Artisan Series. According to New York Style Guide magazine, the annual arts competition is a search for “the next big name in visual arts,” bringing 16 finalists to Scope Miami Beach to showcase their work in front of an esteemed panel of judges including Rush Philanthropic Arts Foundation co-founder, Danny Simmons. Mr. Bloodworth’s winning piece, “Naturally II,” was chosen out of thousands of submissions. “Around 50,000 artists were invited to submit their work,” said Mr. Bloodworth. “They pick the winners regionally and I won the regional award. Then, I was one of the finalists that got invited to Miami.”

Mr. Bloodworth enjoyed a luxurious trip filled with different art showcases every day. “They flew me down and we stayed in a really nice hotel for four days,” said Mr. Bloodworth. “We got tickets to everything there and it was all already paid for.” Additionally, the artists enjoyed spending their nights at chic Miami clubs. “[There] was an exclusive event on a rooftop in Miami and we even had to go in a secret elevator to get there,” said Mr. Bloodworth. “Russell Simmons and his brother, who is also an artist, hosted the party. Jermaine Dupri was the DJ, and celebrities Rosario Dawson, A$AP Rocky and Big Sean were all there.”

Artists submitted a large variety of artwork to the competition. The grand prize winner was a man named Darius Frank who created a 12″ x 12″ portrait of a girl. The second place winner created Louis Vuitton luggage out of Legos. “It was huge, four feet tall, probably six or seven pieces of luggage,” said Mr. Bloodworth. “It was really cool.” As the winner, Darius Frank will now move on to collaborate with New York-based non-profit arts organization Creative Time, on a groundbreaking public arts project scheduled to be unveiled in Spring 2017. He also won a solo exhibition at next year’s Scope Miami Beach, according to New York Style Guide.

Mr. Bloodworth was recently selected as a finalist for The Black Arts Expo, a juried art exhibition in Miami during the month of February. Awards will be announced Feb. 27.