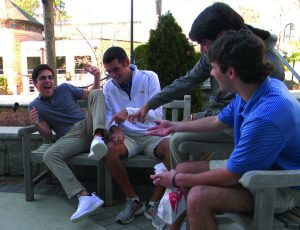 Atlanta’s weather is known for being unpredictable and independent of following “seasons.” The city’s southeastern location contributes to mild low temperatures and averages higher than other regions, but the warm climate is not all that makes the weather so quirky. Once fall arrives, each week seems to bring a new season, constantly shifting from pleasant and sunny to rainy and warm to frigid and cloudy. Seeing shorts and T-shirts in December and January is not at all unusual, while some Atlantans get excited to break out their snow boots and heavy coats on the rare occasion of snow, if it even comes. “It’s just cold and there’s no snow,” said freshman Paul-Louis Biondi.

But there are no evil weather gods controlling our city, constantly keeping us in a state of confusion about our environment. Instead, a number of factors contribute to the erratic weather patterns we observe. Geographically, Atlanta is unlike most major cities because it lacks natural barriers that traditionally would prevent urban sprawl and development.

The region surrounding the city is flat, bordered by mountains to the north, with higher altitude, and lower altitudes in the southern region. Weather from surrounding regions and states that eventually reaches Atlanta must travel through these natural obstacles, taming any extreme conditions. The severity of these traveling conditions cannot be predicted, though, as some tornadoes, hurricanes and snowstorms are able to pass through the mountains or lowlands.

In addition to the occasional storms that pass through Atlanta, the inconsistent rainfall also contributes to its unpredictable climate. In the fall of 2016, over a month passed without rain. However, some weeks seem to bring rain each day. “It’s cold and then hot and then cold again,” said senior Michael Chen. “It just never stays the same.” These trends of rainy weeks and sunny weeks make the occasional snowfall hard to evaluate, because the amount of time snow will stay on the ground and threaten transportation could be short on a sunny day or last a week and cause a “Snowpocalypse” on a cloudy one.