In the world of music, 2016 was a depressing year. Legends Prince, George Michael and David Bowie all passed away, along with many other supremely talented artists. But 2016 also provided us with outstanding albums and songs coming from industry giants as well as new artists. David Bowie released Blackstar this year before he passed away.

Hip-Hop/Rap dominated the charts this year, thanks to the numerous albums dropped. The Life of Pablo, Kanye West’s seventh studio album, was arguably the most hyped up album of the year aside from Drake’s Views. Although the album had a few joke songs like “I Love Kanye” and “Famous” (to an extent), it was still an excellent album with deep songs like “Ultralight Beam” and “Real Friends” as well as more upbeat songs like “Father Stretch my Hands Pt. 1” and “Waves.”

Chance The Rapper was a fairly new rapper until he released his third album Coloring Book, which was a pleasant surprise. Chance’s album exploded with the songs “No Problem” and “Angels.” Aside from these two giants, Frank Ocean released his second studio album Blonde and J Cole released his fourth studio album, 4 Your Eyez Only.

The year 2016 produced many pop and alternative hits as well. The year started off strong with “Can’t Stop the Feeling!” by Justin Timberlake. Twenty One Pilots saw success in 2016 after the release of Blurryface which came out in late 2015. The band’s hit singles from this album were “Ride” and “Stressed Out,” but they produced another number one hit with “Heathens,” part of the “Suicide Squad” soundtrack.

Rihanna and Beyonce exploded on the charts this year with their hit albums Anti and Lemonade, respectively. Lukas Graham received international attention with “7 Years” which peaked at number two on the “Billboard 100.” Starboy by the Weeknd came out in December, capping the year with a fantastic album.

Many of the highest-ranking songs of 2016 shared the theme of having dance beats as well as electronic vibes in the background. “Cold Water” by Major Lazer and “Let Me Love You” by DJ Snake are perfect examples. “I Took A Pill in Ibiza” by Mike Posner topped the charts for almost half of the year as well. 2016 was the year of The Chainsmokers who became popular off of the song “Rozes.” Thereafter, the duo’s popularity skyrocketed after the release of “Don’t Let Me Down” and “Closer,” the latter being one of the most popular songs of the year.

Although 2016 was a depressing year with the loss of so many beloved artists in the world of music, many of the albums and songs that came out this year helped alleviate the sadness. The year was filled with terrific offerings from numerous genres, with a wide variety of music to appeal to all types of people. 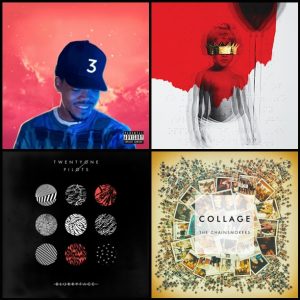 From top to bottom, on the left “Coloring Book” by Chance The Rapper, “Anti” by Rihanna, ” on the bottom “Blurryface” by Twenty-One Pilots and “Collage” by The Chainsmokers.
Photo: chanceraps.com, rihannanow.com, twentyonepilots.com, thechainsmokers.com