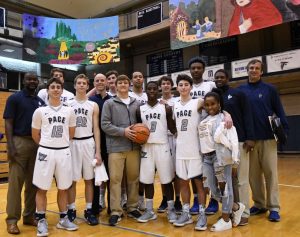 Members of the 2015-2016 varsity basketball team pose for a photo after the unveiling of the state championship banner on Jan. 10. Photo: Fred Assaf

Over winter break, the varsity boys basketball team competed in two of the nation’s most prestigious high school basketball tournaments: Culligan’s City of Palms Classic in Ft. Myers, Florida and the Beach Ball Classic in Myrtle Beach, South Carolina. The Knights entered both tournaments hoping to improve by facing some of the top talent in the nation, regardless of the results.

The Knights began their strenuous holiday schedule at the City of Palms Classic against the East Memphis Mustangs from Memphis, Tennessee, the 11th ranked team in the nation according to MaxPreps. A 17-11 first half rebound advantage in favor of the Knights gave the PAK a one-point lead going into halftime. But the team was unable to handle the Mustangs’ press in the second half, losing the game 76-42.

The next game for the Knights was no easy contest, as the squad faced the Norcross High School Blue Devils out of Norcross, Georgia, ranked second in the nation according to MaxPreps. Once again, the Knights fought hard in the first half, but were unable to contain the talent of the Blue Devils in the second half, a common theme throughout the tournament.

In their final game of the tournament, the PAK faced off against the Mariner High School Titans from Cape Coral, Florida. This game was intense from the beginning, as neither team was able to gain an upper hand. The Knights looked as if they were going to pull away with the win, but a last second layup by the Titans sent the game into overtime. The Knights struggled to contain the Titans’ momentum, and ended up losing the game 65-57.

Before traveling to Myrtle Beach for their second tournament of winter break, the PAK had a three-day break to relax before their next game. In their first contest in the Beach Ball Classic, the Knights faced the McQuaid Jesuit Black Knights from Rochester, New York. The PAK cruised by McQuaid, winning by a score of 63-36, their first win over the holidays.

In their next matchup, the Knights played the Westchester Enriched Sciences Magnets Comets from Westchester, California. Like many of their other games, this one proved to be a very intense, close contest. Westchester led by one point at halftime, but the Knights were able to break through in the second half, defeating the Comets 51-46.

To earn a shot in the championship game, the Knights had to defeat the Evanston Township High School Wildkits from Evanston, Illinois. The Knights got off to an early lead, but the Wildkits were able to make a run of their own, winning the game 57-44 due in large part to the Knights’ 21 turnovers.

In the fourth place game, the Knights played the Dillard High School Panthers from Fort Lauderdale, Florida. Once again, the Knights battled in another closely contested game, and, for the second time in holiday tournament play, the Knights headed to overtime. The Knights suffered another loss, this time with a score of 49-48.

Overall, the Pace Academy Knights fared much better in the Beach Ball Classic, as senior Wendell Carter, Jr. and junior Isaiah Kelly were named to the all-tournament team. Wendell was also able to break the tournament’s rebounding record, securing a grand total of 68 rebounds over the course of four games.