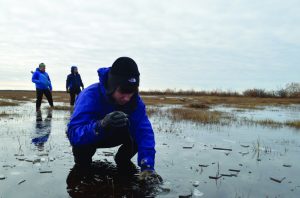 The phrase “climate change” has received more attention in the past several months and was a topic of discussion during the presidential election. It is also the Isdell Center for Global Leadership’s (ICGL) theme of the year. Many students are aware that climate change “is a thing” and is happening right now, but the degree of severity the situation holds is not widely understood.

Climate change has become politicized, but the term refers to all types of ways in which the climate is being altered and is evolving. This phenomenon has been occurring for the entirety of the planet’s existence, but scientists are now measuring and reporting on the more sudden changes in the environment. Not all climate change is necessarily bad, but in terms of global warming, humans continue to harm the environment. Climate has a serious impact on all life on earth, and young people will be greatly affected by these changes.

The effects of climate change are more evident in remote areas than populated ones, but no region is exempt. Additionally, climate change is not exclusive to the scientific world. “It is equally a cultural as well as a social process,” said senior and ICGL scholar Ross Cefalu. “People don’t realize how much it will influence our lives as we begin to pursue careers.” The ICGL board and scholars alike are aiming to study the issue further and relay their discoveries to the student body in hopes that students and faculty will begin to get involved in a solution. “Everyone needs to get involved if we are going to make a real difference,” said senior and ICGL scholar Max Irvine.

The fields that climate change has created and will produce hold numerous opportunities for young people to pursue as they seek their first jobs. “Lots of new technology has to be developed to help fight the problem,” said Max. Bright and innovative individuals can pursue a great degree of success by getting involved. “This [climate change] will directly impact our lives, and it’s not something we can keep pushing off to the next generation,” said Ross.

In addition to following the the work of the ICGL scholars, there are other ways to contribute to finding a solution. Students can carpool, conserve energy and compost, as well as learn further information about the issue. Ultimately, though, the most important thing students can do is to recognize that climate change is happening and that their generation must confront it.