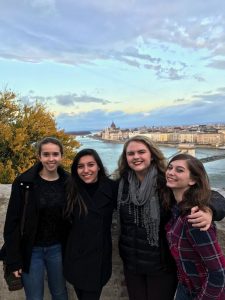 Embarking on Nov. 19, 10 students from ninth to eleventh grades along with faculty members Jonathan Ferrell and Helen Smith travelled to Budapest, Hungary. This trek, however, was not the typical ICGL global education trip. Although the group explored the history of Budapest, they also participated in the annual Yale Model Government Europe policy simulation.

Attendance at the conference requires extreme preparation in advance, including researching a given country and angling one’s paper using that country’s position. “My favorite part of the trip was definitely the model itself,” said sophomore Merritt Ann Glass. “It was very interesting to meet people from all around the world and talk about their opinions on various issues.”

Model UN, including Model Government and Model Arab League, is a conference in which students are delegates that represent various countries. Students have to make speeches to their fellow delegates on their country’s positions regarding specified topics. The model allows students to learn new information about countries that they may have never even heard of.

This year Pace did exceptionally well, with many students receiving recognition. Freshman Andrew Miller was awarded with the title of Outstanding Delegate for his committee. This is a high honor which very few people receive. Juniors Jeb Carter, Maggie Cushman and Anna Stone received Honorable Mentions.

This model was a little different from others, such as Model Arab League. Merritt Ann attended Model Arab League last year, but it didn’t help her prepare that much for this model. In Budapest, she was part of a national cabinet in which she was given an issue regarding a specific country. She prepared for many weeks before the model with a proposed solution.

“The students wanted to do well and they spent long hours working on their papers,” said history teacher and Model UN sponsor Helen Smith. “This was the hardest working group I have ever worked with, and they were able to learn a lot about writing and constructing papers.” Even though the process to get ready for the conference was very time consuming, it paid off. “The students actually thanked me for making them rewrite their papers over and over again,” said Ms. Smith.

Halfway through the committee, delegates were given an additional crisis. “I had to think of solutions quickly from the top of my head,” said junior Molly Richardson. “Even though it was stressful at times, it was a very exciting and rewarding experience.”

Although students and chaperones had to spend their Thanksgiving abroad instead of with their families, the multiple enriching excursions made up for this loss. The group attended two committee sessions on Thanksgiving but later went to a nice restaurant together in lieu of a Thanksgiving meal. Other mini trips included touring the Jewish area of Budapest and learning how it was impacted during historical periods such as the Holocaust.

Another facet of Budapest’s history is its Communist past. “It was really interesting walking around Budapest and learning about the historical events that happened there, because it applies to a lot of the ideas I am learning right now in AP European History,” said Merritt Ann.