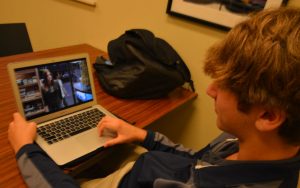 Get your computers ready because new shows and seasons are hitting Netflix just in time for winter break. Whether users are into sci-fi, action, comedies or horror, Netflix streams for all. Binging season is arriving as well as new TV shows including “Stranger Things” and new episodes of “Black Mirror,” “Family Guy” and “Vampire Diaries.”

After taking a little break, the TV series “Black Mirror” is now back and is getting great reviews. “’Black Mirror’ has a great storyline,” said senior Laura Shelton. “You definitely won’t see technology the same after watching this.”

If users are into mild horror, there are many great options on Netflix. For example, the breathtaking TV series “Stranger Things” is raved about by many Netflix users. “Although ‘Stranger Things’ didn’t just come out, it’s fairly new and I recommend watching it,” said sophomore Regan Bates. “Its extremely creepy but so good. I can’t stop watching it. There’s mystery, humor and horror so everyone should go watch it.”

If Netflix viewers want to get a good laugh over vacation, Netflix is airing new episodes of the classic “Family Guy.” “The show is just hilarious,” said sophomore Max Appel. “If you want a good laugh, I promise you’ll get one watching this show.”

In addition to these many great shows, for seven seasons Netflix has been streaming the mythological “Vampire Diaries.” “Everyone should definitely watch ‘Vampire Diaries,’” said freshman Lucy Ferry. “It doesn’t strictly follow the book but it doesn’t stray too far from the plot. The mythologies of all the different powers are so cool, too.”

Also for the “Gilmore Girls” fans, the new Netflix original “Gilmore Girls: A Year in the Life” is now available to watch online. Whether people are relaxing by the beach, on a flight or just lounging around, with just a click they can watch an endless amount of quality TV with Netflix.