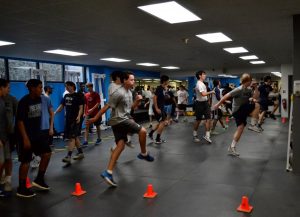 Athletes perform a variety of movement exercises to activate the nervous system and warm up the muscles before strength training. Photo: Marc Mitchell

Injury prevention, conditioning and performance enhancement are the core values of strength and conditioning coordinator Clement Rouviere’s 2016 preseason program. It is no simple task to develop 11 spring sport programs in the heart of the winter season, yet Clement manages the two schedules with ease. “There’s a huge demand and enthusiasm from kids in every sport, girls and boys,” said Clement. “I’ve noticed a sense of pride in the weight room.” As long as the athletes make a commitment to train and maintain a tenacious attitude, Clement is willing to coach them.

When athletes walk into the weight room, the staff expects a positive attitude, strict discipline and a sense of camaraderie from each and every team. “Great athletes give me everything they have every day,” said Clement. He puts athletes through a rigorous routine that involves a rotation of warm ups, stretching, weightlifting and conditioning. Each workout is structured in a similar format but the exact workouts vary daily.

Athletes begin with a soft tissue exercise to loosen muscles followed by movements to activate the nervous system. From box jumps to medicine ball tosses, student-athletes gradually use heavier weights, increasing the overall difficulty of the workout as their performance improves. Next, the students shuffle to the second section of the weight room to focus on weight training and strength. Concentrating on core stability and creating a strong, balanced foundation, students perform squats, pull ups, planks and band resistance drills among other exercises. The workout finishes with conditioning on either the indoor track or around the campus.

To meet the demands of practice and games, the weight room staff says it is imperative to be healthy and stay in shape. “Winning is third on the list,” said Clement. This emphasis on a productive, healthy environment has been replicated in the weight room with its new additions. Equipment was moved to maximize square footage and upgrades were made to obsolete gear. Lifting platforms were traded for rubber floors, cutting edge dumbbells were purchased to maximize weight and rep efficiency and college-grade “Sorinex” racks were installed. This equipment has been featured in programs at Penn State, Auburn and the Denver Broncos. Nevertheless Rouviere has taken a more minimalistic approach this year, ensuring that there is sufficient free space for his movement exercises.

Accompanied by athletic director Troy Baker, Clement is ushering in a preseason that encourages all athletes to participate. Although every sport performs the same workout, the specific lessons change daily. Nevertheless, each team may focus on different aspects of the workout and take away different outcomes. Although sports such as boys lacrosse have been known for their intensive workouts, Clement has been impressed by the girls this year in preseason. “I just like the attitude of the girls lately,” said Clement. “They’ve brought a real positivity to the weight room and are not being intimidated any more by the environment.”