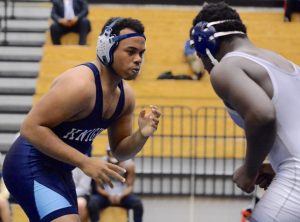 Current junior Justin Morris sets himself to wrestle his opponent in the 2015-2016 season.
Photo: Fred Assaf

As winter approaches, fans can expect the beginning of one of Pace’s most grueling sports: wrestling. During the first few months of school, any wrestling prospect is asked by head coach Mark Sommerville, “Will I see you wrestling this year?” but only few students accept the challenge.

This year the varsity wrestling team will be made up of 12 student-athletes. “We have a heavy load of juniors, making the team quite strong with a combination of leadership and experience,” said Coach Sommerville. “Most have been in the program since middle school and are desperately desiring to improve last year’s top 10 place in State.”

The team will be led by their sole senior, Jonathan Boss. “Senior captain Jonathan Boss appears ready to have a break out season for us,” said Coach Sommerville. Jack Walsh, the only senior from last year’s squad, finished second in the state in 2016 and continued his wrestling career at the University of Virginia. “We may never be able to replace Jack’s leadership and strong passion, but I have learned over the years there will always be a ram in the bush,” said Coach Sommerville. Jack had 122 career wins, the second-highest number ever in Pace wrestling. He also made the state tournament four times.

“Leading the way this year is [junior] Frank [Houser],” said Coach Sommerville. “He is the captain, and although he is injured right now, his presence alone seems to motivate others.” Frank finished second in state and won 34 matches in 2016. Although the team consists of 10 upperclassmen, the Knights have high expectations for two younger wrestlers. “Sophomore Charlie Warren and freshman Blaise Reyes have been working out since about one month prior to the official start,” said Coach Sommerville. “They seem to be prepared to be more than ready as we start the season.”

Charlie enters his second season on the team looking to improve on his freshman campaign. “I’m excited for the season to start up again, as I want to emulate Frank and Jack by getting to State, and hopefully winning a ring,” said Charlie. Blaise will be the youngest on the team, but will have plenty of experienced teammates around him.”I can already tell that I’ll learn a lot from the older guys, and I’m looking forward to building up my own reputation as a standout wrestler,” said Blaise. The fitness required for wrestling is second to none. In order to compete among the best competition, wrestlers are required to cut their own weight, lift weights and endure long cardio workouts.

“I think wrestling is one of the toughest sports at Pace Academy; no one ever fully appreciates how much work we put in each and every week,” said Frank. During their pre-season workouts, the wrestling team runs on the track and works daily with fitness coaches Clement Rouviere and Sekou Walton. Wrestling also provides a way for athletes who consider other sports to be their main focus to stay in pristine shape.

“Wrestling is one of the toughest sports to stay in shape for, without a doubt,” said junior Justin Morris. “It’s important for me to keep my fitness and quickness at the highest level possible in the offseason.”