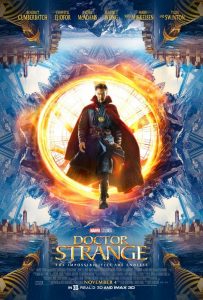 “Doctor Strange,” directed by Scott Derrickson, was a smash hit at the box office when it opened on Nov. 4, and recently broke the record to become Marvel’s biggest single-character intro film worldwide. I consider myself a Marvel connoisseur and I was pleasantly surprised by “Doctor Strange.” The cast was impressive, featuring people like Tilda Swinton, Rachel McAdams and Chiwetel Ejiofor, who are all award-winning actors. The lead character, Dr. Strange, is played by Benedict Cumberbatch from “Sherlock,” and he plays the egotistical smart aleck perfectly.

In addition to the impressive cast, the special effects,  cinematography and plot were memorable. From the very beginning, the movie captured my attention and held me enraptured throughout. I was enchanted with the 3D effects which made the scenes come to life. I was on the edge of my seat for most of the movie.

The movie perfectly blended action and comedic relief in the form of snarky comments by Dr. Strange. It also presented a whole new realm of Marvel. This mystical realm tied into the other Marvel productions with references to “The Avengers” and “Guardians of the Galaxy” movies. However, people who have never seen a Marvel movie would definitely enjoy it, too.

Originally, “Doctor Strange” was a Marvel comic series made by Steve Ditko and Stan Lee. It was first released in July 1963. I have not read the comics so I cannot attest to how closely the movie followed the comic book action, but I can certainly attest to the movie’s appeal.

Dr. Stephen Vincent Strange works at a hospital with his love interest played by Rachel McAdams, who actually acted in a different Sherlock production than Benedict Cumberbatch. Strange, right? The arrogant and brilliant Dr. Strange gets in a car accident and can no longer move his hands without them shaking, ending his career as a famous surgeon. In search of a cure for the nerve damage in his hands, he goes to Nepal for special treatment and unexpectedly winds up in a magical mess.

This may be one of my favorite Marvel plots and I recommend it to everyone. Whether you’re interested in the actors, the plot or the special effects, or you’re not interested at all, “Doctor Strange” is a must-see that most everyone would enjoy.