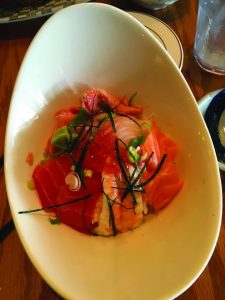 The chirashi at Yakitori Jinbei was sloppily garnished with many strips of nori. Photo: Will Movsovitz

If nothing else, I am a man of many habits, and one of these particular habits is frequenting many of the same restaurants every week. Last Saturday the lunch line at my favorite taco place was out the door, so with stomach growling, I knew I had to improvise. After scanning the shopping center I spotted a sushi restaurant that I had previously overlooked. With Yelp reviews calling it a “hidden gem,” I walked into Yakitori Jinbei with an open mind. After eating there, though, I left disappointed.

When I first walked into the restaurant, it looked promising. There were specials written on a board in Japanese, and I was hoping for an authentic dining experience. The dining room was not large but was fairly crowded. I sat down at a table and looked over the rather small lunch menu. The sushi selection was not extensive, and most of it was cooked. I decided to go with their chirashi don, a chef’s selection of different types of fish served over rice, to get a good feel for the quality of the fish.

The chirashi was part of a lunch special that came with soup or salad. I asked for a salad, and it came out almost immediately. I noticed quickly, though, that something was wrong with it. The lettuce and other produce seemed to be fresh, but the dressing looked oddly like storm runoff. The whole thing also tasted a little bit like peanut butter. Needless to say, I did not finish my salad.

Nevertheless, my hopes were probably too high for my incoming chirashi bowl which arrived shortly after. The chirashi was a small portion of fish in a large bowl, and it was garnished sloppily with strips of nori. The presentation may have been haphazard, but the taste was worse. Each piece of fish was covered in a thin layer of water and did not taste fresh at all. The salmon especially left a bad aftertaste. The rice itself was very cold, and this fact alone led me to believe that the entire chirashi was premade and refrigerated prior to my ordering it.

Out of fear for my own health I declined to finish my lunch and asked for the check. The price was an unreasonable $15 for one objectionable portion of fish. There are certainly better lunch deals for better quality at most other sushi restaurants in Atlanta such as Sushi Huku or Hoki. Yakitori Jinbei should be avoided at all costs.