Pace Advances to Next Round of High Q 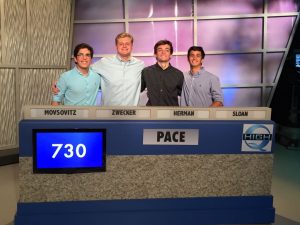 (L-R) Team members Will Movsovitz, Mitchell Zwecker, Avery Herman and Brian Sloan smile after winning the first round of competition. Photo: Will Movsovitz.

Sweat drips down the foreheads of seniors Avery Herman, Will Movsovitz, Eno Reyes, Brian Sloan and Mitchell Zwecker as they attempt to answer the given question as quickly as possible. With cameras and an anxious audience facing them, the pressure in the room is palpable. This is none other than the high-speed high school trivia tournament, High Q.

Pace has been participating in this tournament for over 20 years, with Mr. Smith as the teacher sponsor for the past 15 years. But because there are more schools interested in entering the annual competitions than there are slots, Pace has not always been selected to appear. For example, last year was the first time in three years that Pace had been chosen to compete.

This year started out a little different. Pace was initially not in the tournament due to the random selection. Thirty metro-Atlanta schools are randomly drawn, and Pace was not one of them. Nevertheless, Mr. Smith was persistent and told the manager of the competition to let him know if anyone dropped out. As it happened, a school declined and Pace was placed in the competition with a short turn-around time of only two days before the taping of the first round.

Brian and Avery competed on the team last year, and Will, Eno and Mitchell attended a few practices. Because of this Mr. Smith knew they would be a great addition to this year’s team. “My favorite part about being on television is knowing that my friends and family are watching me,” said Brian. The team continues to work well together as they learn one another’s strengths and weaknesses. “The team this year has fantastic chemistry,” said Will.

The group initially competed against Galloway and won with a total score of 730 points, beating Galloway by a whopping 285 points. To prepare for the grueling competition, the team has attended practices led by Mr. Smith. The team practices questions with a buzzer system, as if they were in the real competition.

“My favorite part is the practices and seeing how much random knowledge the students have accumulated over the years,” said Mr. Smith. The Pace competition will air on Dec. 18 at 1 p.m on WSB-TV. The team will compete again in the middle of February and based on their performances, they could end up in the championship in April. “The hardest question I have ever had was about rhythmic muscle contractions and their role in digestion,” said Will.