‘A Touch of Genius’: The New MacBook Pro 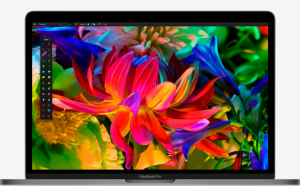 Looking for a Christmas present? The new MacBook Pro has just been released. With up to 10 hours of battery life, the new laptop is remarkably faster and more powerful than ever before. It is now up to 130% faster, 17% thinner and the graphics are displayed 67% brighter. It also introduces the new Touch Bar and Touch ID .

The Touch Bar is a multi-touch strip that replaces the old function keys on the top of the old keyboard. The strip changes its view automatically, enabling instant access to any relevant tools based on what you are doing. The strip allows for quick access to emoji features and apps like Mail and Messages, as well as audio and FaceTime calls. It also supplies basic system controls like volume and brightness. Users can also customize their Touch Bar with apps and functions they use most often.

Now available on the new MacBook is the new Touch ID.  With just the touch of a finger, users can log in to their computer and have instant access to online and offline logins. They can also secure online purchases with Apple Pay as well as save private passwords.

The new and improved display features brighter LED backlighting while delivering deeper blacks, brighter whites and more vibrant colors. Apple claims this display contains 25% more colors than the older versions, and has a contrast ratio of 67%, much higher than the previous MacBooks.

The MacBook’s new speakers have been redesigned, providing twice as much dynamic sound range. According to apple.com, it also has up to 58% more volume and the bass is 2.5 times as loud as the other MacBooks.

The Trackpad also has significant advances: it is now more responsive and expansive. The Force Touch trackpad is two times larger with four times more key stability, allowing for more room to move around.

The base price for the 13″ MacBook Pro with the new Touch Bar is $1499. It’s now available to order online or buy in stores, just in time for the holidays.