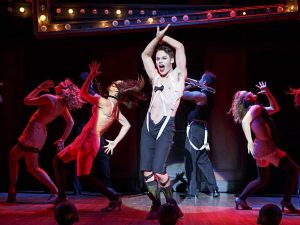 Students “left their troubles outside” on Nov. 4 and travelled to the Fox Theatre to see Roundabout Theatre Company’s “Cabaret” on a field trip with Pace Theatre Director Sean Bryan. The theatre company performed in Atlanta on their 50th anniversary tour.

Based on Christopher Isherwood’s “Goodbye to Berlin” and adapted for the stage, “Cabaret” made its Broadway debut in 1966. The performers take the audience on a journey to Berlin in 1931, during the Nazi’s rise to power. Blossoming American writer Cliff Bradshaw arrives at the seedy Kit Kat Klub and meets the renowned Emcee. The Emcee is the host of the Klub, played by Randy Harrison in the Roundabout Theatre’s national tour.

Mr. Harrison is a Pace alumnus from the Class of 1996. Along with headlining in his lead role in “Cabaret,” he was also spotlighted in Broadway productions such as “Wicked” and appeared on the Showtime network’s “Queer as Folk.”

On Nov. 3, Mr. Harrison ventured back to his alma mater and the art program, which he called his “theater home.” He met with students during D period and reviewed his journey to success and his life on the road, as well as what is next in his career. After school, he met with students again to discuss the Gay Straight Alliance at Pace and its general acceptance in the academic environment. Mr. Harrison, an openly gay man, was in awe of the increasing acceptance and celebration of all things involving the GSA.

Mr. Bryan and the students who went on the field trip were treated to balcony seats with a wide view of the stage. “The play itself was incredible,” said sophomore Henry Todd. “There was great music, great characters, great story and my favorite: plot twists.” After the dazzling show was over, Harrison led the Pace kids on a behind-the-scenes tour of the Fox Theatre.

“He let us walk around and take pictures on the stage,” said sophomore Emily Schmitt. “It was huge and the lights were so bright. It was incredible.” Students had the opportunity to meet a successful actor as well as a Pace alumnus and role model. “He told us what it was like to be on stage and all the pressure, but also the great sense of reward that comes from acting on a stage,” said Henry.