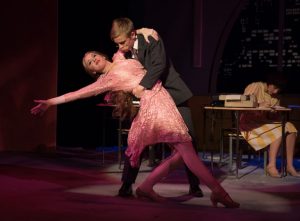 I was most surprised by the talented acting in “Thoroughly Modern Millie.” Freshman Matthew Quintana, junior Will Nulty and senior Mitchell Zwecker played three Chinese characters, and they somehow managed to speak in Cantonese for the entire show. The three memorized an immense amount of lines while pronouncing each word to the best of their abilities in accents. Junior Jeb Carter as Jimmy Smith was the male protagonist, and he fit his charming role surprisingly well, too.

The two female leads blew me away. Senior Willie Lieberman’s acting and singing were amazing and surreal to the point where she actually seemed like a rich lady (Miss Dorothy) in the 1920s. Senior Ellie Duncan, playing Millie Dillmount, acted and sang exceptionally well and her interactions with every character made the show very entertaining. You could tell that she really put a lot of hard work and effort into doing her absolute best in the show.

Pace’s theatre program has always been renowned for the singing so “Thoroughly Modern Millie” had a lot to live up to. Boy, but they sure did. “The Speed Test” was my favorite song by far because the majority of the characters sang. It also featured many solos, notably junior Cole McCorkle as Trevor Graydon singing so quickly he was practically rapping. Another junior, Ibum Obu as Muzzy Van Hossmere, sang as if she was truly in the Roaring Twenties.

Pace theatre productions tend to have unbelievably intricate sets. “Thoroughly Modern Millie” was no exception. The set stood out with a unique combination of colors, and the costumes contributed to the 1920s New York City setting. Students wearing extravagant costumes blended with the background to create a somewhat fancy undertone. When I was looking at the stage, it felt like I was observing a colorful and lavish party. Even when the characters weren’t wearing luxurious dresses and the settings weren’t as fancy, I was still entertained by looking at the stagecraft and costumes.

“Thoroughly Modern Millie” was a surprising success. The show is definitive evidence that the theatre program isn’t slowing down any time soon.