Volleyball Makes History all the Way to State 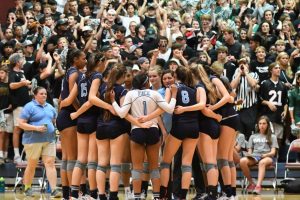 The Knights squad comes together for the last pre-game talk in the state championship.
Photo: Fred Assaf

After a historic 2015-2016 year for Pace athletics, in which both boys varsity football and basketball won the state championship for the first time in history, the varsity girls volleyball players have taken another historic step in athletics. With consecutive Elite Eight appearances in 2014 and 2015, the team was poised for success heading into the 2016 season. After winning the area championship against Lovett, the team fought their way through the state tournament, making the 2016 squad the first ever volleyball team at Pace to make it to the Final Four and the State Championship. “I think this year’s team set important precedents for future teams, which is vital if you want to constantly strive for excellence,” said head coach Anna Bush.

The Knights began the state tournament with a home match against Fannin County High School, dominating the Rebels. Winning the game by set scores of 25-10, 25-15 and 25-12, Fannin County was no match for the Knights’ size at the net. Senior Meghan Botsch had 32 assists and the Knights combined for seven aces, as they breezed into the Sweet Sixteen. The Knights played host to Jackson County, and cruised to a straight set victory, which was followed by yet another straight set victory against Sonoraville High School in the Elite Eight. “Our size and athleticism helped us in the first couple of rounds,” said senior Kaki Cox. “We really started playing our best volleyball. Our serves, sets and spikes were really working.” The Knights were fortunate to have home court advantage in each round all the way up to the State Championship.

The volleyball team finally met their first real challenge in the Final Four, as the Lovett Lions came to the Inman Center. The Knights had already beaten the Lions three times in the season, making this game a chance for revenge for Lovett. An electrifying atmosphere combined with the fierce rivalry resulted in a memorable game. Both student sections were packed, as neither school was willing to let the other gain an upper hand. The Knights lost the first set 17-25; however, the Pace team battled back quickly, winning the second set 25-16. “It was a slow start for us, but we knew we were the more talented team,” said junior Cameron Perchik. “Winning the second set gave us confidence that we could still get the win.”

But after the second set Lovett quickly got into their groove, taking a 15-10 lead, and didn’t look back, winning the third set 20-25. The Knights found their own mental toughness in the fourth set, recovering from multiple early deficits and tying the game at 23. Meghan made killer serves to the back middle, which Lovett couldn’t handle, giving the Knights a 26-24 lead and forcing a fifth set. “It was crazy how we fought back so much in this game, but seeing the student section going crazy like that was so much fun,” said Meghan. The fifth set was one for the ages, as the Knights clawed their way back from an 11-8 deficit, winning 15-12 and sending the Pace faithful into pandemonium. “Honestly, I was really worried about Lovett, because it is so difficult to beat a good team multiple times,” said Coach Bush. “I had already planned what I was going to say to the team about five different times thinking we were going to lose, so when we finally scored that 15th point in the fifth set, I was still in shock.  All the kids storming the floor, it was just a tidal wave of emotion and pure joy. I will never forget it and the girls won’t either.”

The State Championship marked another memorable chapter in the intense Pace-Westminster rivalry. Both schools brought hundreds of students to the Holy Innocents’ gymnasium, creating a raucous atmosphere for the final game. “The student support was insane,” said senior Summer Brown. “I was amazed to see all the fans that came out and made so much noise. I hope to get half of that support in college.” After a tough 19-25 loss in the first set, the Knights dominated the second set at the net, winning 25-23. “We started the game slow, yet again, but we made strides in the second set, showing how we could play with Westminster,” said Kaki.

Senior McKenzie Baker spiked home numerous Meghan Botsch assists, which created confusion for the talented Westminster squad. After some banter between sets among the fans, the Knights came out firing in the third set, taking numerous early leads. After Westminster’s star junior Gabby Nolan began to find her groove setting and spiking, the Wildcats pushed back and took the third set 24-26. “It was tough for us to fight back after that killer set,” said Cameron. The Knights were unable to reproduce the same fourth and fifth set magic from the Lovett game and lost 18-25. “Going all the way to the State Championship and how things played out was so incredible for the school,” said Coach Bush. “I don’t think I was prepared for all the support by the students, school and community. As far as this season, we accomplished a great deal. We defeated Holy Innocents’, Mt. Paran, Wesleyan and Westminster for the first time ever. I think it helps create a culture of higher expectations as our program continues to grow and mature.”