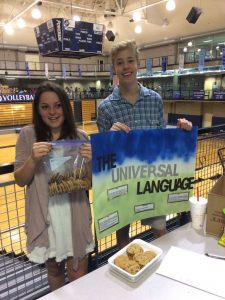 The Universal Language Club is a new service club led by juniors Schuyler Drose, Jordan Shoulberg and Sam Delman. The club sets up soccer games, picnics and equipment drives with Syrian refugees and South Africans. “We want to teach these refugees about our culture and language while having fun at the same time,” said Jordan.

The refugees came to America because of the ongoing Syrian Civil War. They’re living in horrible conditions, lacking everyday supplies. Plus, the majority of the refugees do not speak English well nor do they know about America as a whole. Through playing soccer the refugees can forget about their worries for a bit and just enjoy themselves.

Jordan, Sam and Schuyler talked about their inspiration for starting this club. Last year over spring break Jordan and Sam went on the ICGL service trip to South Africa. Thanks to Kick4Life they were able to play soccer with people from Lesotho. “After this amazing experience, Jordan and I decided that we wanted to do something because soccer can bring people together even if you don’t speak the same language,” said Sam.

Schuyler saw a spreadsheet of supplies needed by the Syrian refugees in Stone Mountain. “If they live like this without these materials then they are not having fun,” he said. Sam and Jordan’s interests lined up with Schuyler’s, thus the Universal Language Club was created.

Right now the club is still in its beginning stages having only been created this year. This service club has potential to be one of the biggest service clubs at Pace because it balances fun and service. “You don’t have to be amazing at soccer to join this club because that’s not the point,” said Schuyler. “We want to help these people.” There’s actually nothing to lose by joining this club. You get service hours by eating food and playing soccer with Syrian refugees. The Universal Language Club’s end goal is expanding beyond Syrian refugees to people from other countries who have resettled in the Atlanta area.