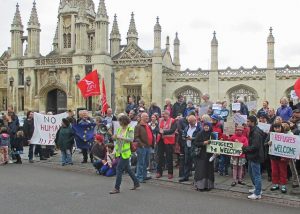 Refugees are welcomed by the residents of Cambridge in the King’s Parade. Photo: Geograph

Given much attention throughout the presidential campaigns of both top contenders, the United States’ immigration policies have been studied in the polls and debated in the streets. The question of immigration has always loomed over America, even during times of prosperity and stability, threatening to split the nation and provoke fighting within our borders over what we should be doing about the borders themselves. Support and opposition to opening the country to more waves of immigrants does not stem from two opposing belief systems; instead, a variety of concerns dictate people’s views on the issue.

Advocates for mass immigration raise a valid point: unless you are Native American, you are an immigrant in this country. Among our population, though, distinctions have emerged between immigrants who are fifth or even tenth generation, as well as between recent immigrants who have achieved the status of citizenship and between those who are still undocumented.

Due to a dangerous civil war, Syrian refugees have been trying to immigrate to the U.S., but they are greeted by unfriendly and hostile “Americans” who are in favor of tightening up immigration policies. A large number of Americans have continuously been opposed to the latest group of immigrants, especially when these groups are in need of an escape. Discriminatory policies have often been established, like the Chinese Exclusion Act and the quota system, assuring the disadvantage of migrants that make it past U.S. borders.

Unfortunately, the Syrians seem to be in the wrong place at the wrong time: their Muslim and overall Middle-Eastern status during an era of perceived radical-Islamic terrorism has made the process much more complicated than it could be. Before 9/11, for instance, Middle Eastern immigrants would have experienced looser policies and gained more support from the American population as a whole. However, even though most of the refugees are of good intent, the anti-Muslim and anti-terror sentiment in America has escalated and citizens are reluctant to trust these immigrants.

This crisis presents a moral dilemma similar to that of the Holocaust, forcing the nation as a whole to choose between political and national security and helping others. Jewish peoples sought asylum in the U.S. in an attempt to escape Nazi discrimination (and eventually extermination), and even though they were all harmless and helpless, the U.S. still denied most of their visa requests. New immigrant groups are easy to target and exclude, especially when the current residents of the U.S. are already divided among themselves.

Since we as citizens cannot agree on our immigration policies going forward, we blindly follow others to unite against a common enemy. The ignorant notions that all of these people are spies, terrorists and threats to our jobs may be understandable, but only a small portion of these refugees are probably “dangerous.” We cannot make gross generalizations about nationalities and assume that just because Isis fighters are Muslim, all Muslims must be terrorists and a threat to our great country. As with the Jews from Nazi Germany, innocent lives may be lost if we fail to consider the situation in its entirety.