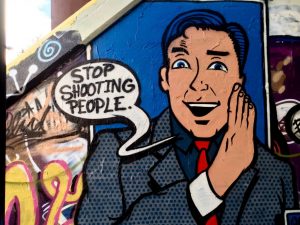 Many people argue that they would not have been killed if they only obeyed the law. However, this can be a smoke screen for people who do not want to acknowledge that many of the victims were unarmed and did not pose an immediate threat. The Civil Rights movement occurred in the mid 1900s. In 2016, some people are still assumed dangerous based on the color of their skin. But according to Pace Academy police officer Chris Golphin, people are shot every day, and police officers do not wake up in the morning planning to shoot someone.

Officer Golphin, who is frequently seen on the Pace campus during the week, was first hired by the Atlanta Police Department in 2003 and sent to the Bankhead Highway area to patrol. According to Officer Golphin, who is mixed race, everyone has the right to protest. However, he also says that people should not break the law. “How hard would it have been to say, ‘Hey officer, I got a gun in my pocket.’ Nine times out of ten, nothing’s gonna happen to you. What’s better: going to jail or having somebody carry you out in a box because you were stupid?”

Social media and news outlets focus on events in certain cities, but these tragedies are not limited to places mentioned on TV. People in our very own Pace community deal with racial discrimination every day. “I’ve been [at Pace] for 16 years,” said upper school visual arts teacher Donice Bloodworth. “It’s not always comfortable.” Donice is a well-renowned artist and an approachable teacher who draws waves from students when they walk into the FAC. Donice is also a member of INSTEAD – a group of faculty members that students can come to if they have an issue related to alcohol or drugs.

“Starting in elementary school, I was one of the smartest kids in my grade,” said Donice. “I was in a school in Tucker when it was transitioning to being a mixed [race] school, so it was predominately white when I first started. I didn’t have anybody that looked like me in my class. I got into arguments. I was taken out of people’s classes because of the way they treated me… That was my first experience in an educational environment.”

“In middle school, we used to get pulled over and questioned and searched,” said Donice. “At that time, it was normal to me. I never thought anything of it. Growing up and working with kids, my middle schoolers that I coach right now are the same age that I was when police used to make us lay down on the ground with our hands behind our backs.” He recollects that times have changed drastically in our country. Nevertheless, he has been pulled over multiple times as an adult, and cops have pulled their guns on him for simply running a stop sign. “Cops pull their guns out all the time,” he said. “It’s hard for people to fathom that, but it’s a normal thing for me to see the cop grab his gun when he pulls me over.”

Lori Baker is a Pace parent and spouse of Pace Athletics Director Troy Baker. “With all of the violence that we’ve seen captured by social media over the last year between black men, women and children and the police it began to feel suffocating,” she said. “As a mother, I began to feel very, very scared for my children and husband.”

“Being afraid for everyday occurrences and encounters with police is now a scary reality that I have to live as a mother and wife,” said Mrs. Baker. “It seemed like even when you do the ‘right’ thing like speak politely or keep your hands where they can be seen at all times, the only way to keep my children safe is to keep them in the house. I spoke with friends of mine, other Pace moms, who all seemed to have the same feeling. How can we protect our boys? It weighed very, very heavy on me.”

Joanne Brown is the Associate Director of Admissions for Pace Academy’s Middle and Upper School. She is also the mother of two graduates of the Academy, Tiger Brown ‘13 and Jean Luc Brown ‘16. Mrs. Brown went to Madagascar this summer as a ICGL chaperone, and she is seen around the Academy giving admissions tours when she is not busy in the Castle. “As a mother who raised two black sons, I’ve never spent more time talking about [racism] than now,” she said. “I think my husband and I subconsciously felt that if they went to the right schools and participated in the right activities, dressed a certain way and spoke a certain way, we would be immunizing them from ever having to experience those things. That is probably further from the truth.”

At the beginning of this school year, Mrs. Baker approached Pace mother Jeny Mathis about creating a safe place for mothers, black and white, to discuss race relations in their community. “Once the media began to pick up the story of Terence Crutcher in Tulsa, Oklahoma, a few facts that jumped out at me were: 1) he was a father of four, and 2) he was enrolled in a school to get a degree of some sort,” said Mrs. Baker. “Not only does my family share the similarity of having four children, but before we moved to Atlanta from Memphis, Dr. Baker drove back and forth from Memphis to Nashville every other weekend for three years while pursuing his doctorate. I can’t put into words how hearing that similarity shook me to my core.” Mrs. Baker and Mrs. Mathis created a Facebook group inviting parents and faculty to speak up and discuss their experiences. People were also invited to listen, empathize and ask questions as to how they can promote healing.

The first forum was held in the Fuqua room in the Upper School in September and the second was in Pace mom Linda Fuller’s house. Mrs. Brown attended both forums. “I think what made them so effective was that people came understanding that maybe they didn’t know everything,” she said. “What we heard from white parents and faculty and students that were there was [they] don’t know how to address this in [their] own personal life or with [their] own children. Those questions came after personal stories were shared by black members of our community.”

“When it’s a story that’s reported in Tulsa or another city or state or maybe appears to be a demographic that looks different than the one that we are in every day, it’s easy to say, ‘Oh, well, that’s happening outside of Pace,’” Mrs. Brown said. “I think those conversations only highlighted the fact that racism exists everywhere. Sometimes it’s subtle and sometimes it’s in your face.”

“In that room on Friday [at the first parent forum], what I heard was there is suffering, and the black families and individuals in our community are desperate to be seen and heard,” said Mrs. Mathis. “Until that moment on Friday, the injustice was only something I sensed. What I felt was embarrassment that I had not responded yet.” Mrs. Mathis and Mrs. Baker plan to continue these meetings throughout the year.