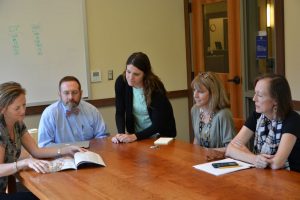 Some teachers have been meeting to figure out how to better incorporate mindfulness into the Pace upper school culture. Photo: Michael Simon

If there is one thing that all students remember from the properly named “Matty Ball Mondays” from the 2015-16 school year, it is mindfulness meditation. “Research has shown that practicing mindfulness can help reduce stress and increase focus,” said Woodruff Library Director Matt Ball, one of several committee members working to incorporate mindfulness into the Pace upper school culture. “Additionally, practicing mindfulness can increase empathy for others, creating more compassionate citizens of the world.”

Mr. Ball first introduced mindfulness to the Pace community in 2014, his first year at Pace. “I was inspired to introduce mindfulness to Pace, because one role of the library is to help students become better learners,” said Mr. Ball. “I thought the benefits of mindfulness would be directly applicable to that goal.” Through his efforts, Pace began hosting mindfulness meditation sessions before school and during break on Wednesdays and Fridays. This provided a resource for students to de-stress midway through the week, and end the week strong.

A group of five upper school teachers took online mindfulness courses over the summer with the aim of working to incorporate mindfulness into the classroom setting. They include guidance counselor Sara Eden, chemistry teacher Stephanie Harrell, math teacher Matt Marsico, academic coach Ryann Smith and newspaper advisor Lee Wilson. “I find Mindfulness very multi-faceted,” said Mrs. Smith. “One aspect of it is helping the students with academics and relieving them of possible stress. However, there is an emotional aspect of mindfulness that allows students to release their emotions.”

High school places a lot of stress on students, especially at a school like Pace, and managing that stress can be difficult. “High school is one of the toughest parts of students’ lives,” said Mrs. Smith. “Finding a way to decrease stress, like mindfulness, could be incredibly useful for students, academically and athletically.”

Basically, if a student has a free period on a Monday, they will have the opportunity to participate in a mindfulness session. “Our goal is to have mindfulness available to students in Fuqua for the first ten minutes of each period on Mondays,” said Mrs. Eden. “The sessions would be led by a member of the mindfulness team. Where we have gotten stuck is that during some of the periods throughout the day, there isn’t a member free to lead the sessions.” Once everything gets worked out, students can enjoy de-stressing during a free period, getting them ready for the upcoming week.