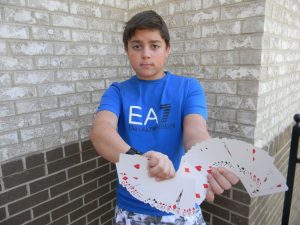 New to Pace this year, freshman Jason Rosenbloum has already captured the attention of the Pace community. Jason is a practicing close-up magician who has been performing for two years.

There are three types of modern professional magic: close-up, parlor and stage. Close-up magic, or micromagic, is performed in front of smaller audiences, with card tricks and sleight-of-hand. Parlor magic is a combination of close-up and stage magic, with more large-scale illusions. “Stage magic is what the big guys do, like David Copperfield or Criss Angel,” said Jason. “They do the huge illusions in front of huge crowds. It really depends on how many people can see.”

Jason’s close friend Ari Eisenberg, a student at Galloway, first introduced Jason to magic in 2014. The boys attended a magic camp over the summer that year. “Ari brought me with him to this amazing camp for magicians, Tannen’s Magic Camp. I had been collecting cards for a while, but Ari got me into the world of magic.” said Jason. Tannen’s Magic Camp is at Bryn Mawr College in Pennsylvania, hosting wannabe magicians from middle to high school, with all levels of experience. “I began the camp in a beginners class, but now I would definitely consider myself an intermediate,” said Jason.

Very early in the school year, this young illusionist was already drawing crowds. Teachers have allowed Jason to execute minor tricks in their classes, and even Pace Theatre Director Sean Bryan let him perform an act of mentalism at the auditions for the fall musical. “Mentalism is like reading minds, kind of,” said Jason. “It’s like a mind trick.” Jason can make an entire crowd of people think with one mind. In order to make people think what he wants, he has to be confident and take control of the room. Using a loud, persuasive voice, he can make an entire audience collectively focus on something as simple as “gray elephants in Denmark.”

Although Jason could have a promising future in illusions and magic tricks, he does not plan to pursue this profession. “I actually want to be a real estate developer,” said Jason. “Magic is just a hobby, but I’m definitely passionate about it and have a lot of fun. I’m actually learning a cool trick right now. It’s for the talent show here, and I plan to win.”