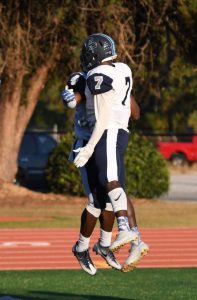 On Friday, Nov. 4 the Knights travelled to Panthersville Stadium in Decatur to face off against the Towers High School Titans. This game had huge implications for both teams, as the winner of the contest would be awarded the final spot in the GHSA 3A state playoffs as a 4th seed.

The next Knight to join the end zone party was sophomore running back Keashawn Perryman. Keashawn ran 14 yards untouched into the end zone, as the Knights took a 20-0 lead in the first quarter. The PAK was rolling, and it looked as if nothing could stop their high-powered offense. During the ensuing Knights kickoff, Patrick Markwalter, the Knights’ sophomore kicker, attempted an onside kick. Towers recovered, however, giving them incredible field position for their next possession.

Two plays later, Towers completed a 29-yard pass that put them inside the red zone for the first time all game. Towers was unable to find the end zone before the end of the first half, however. On the second play of the second quarter, Towers’ quarterback ran the ball down to the 3-yard line, which set up a touchdown pass to the right corner of the end zone for Towers. Towers then attempted a 2-point conversion, which failed after a fumbled snap. At the beginning of the second quarter, Towers had cut the lead to 14 points.

On the Knights’ very first play of their next possession, Keashawn broke away from the Towers defenders for a 67-yard touchdown run, his second of the day. Patrick was able to connect on the extra point, giving the PAK a 27-6 lead.

On the Titans’ following possession, things got chippy between both teams. Tower’s running back powered ahead, running over many Knight defenders on his way to a 10-yard rush. Directly after this run, players from both teams began to shove other players. Officials failed to break up the fight immediately after it started, which resulted in both teams clearing their bench and rushing towards the area of the field where many players from each team congregated. Some Knights, however, returned to their sideline and even gathered across the track surrounding the football field.

During the “fight,” the referees ejected many players from both Pace and Towers. Security guards rushed onto the field, and the officials met at the 50-yard line to discuss the outcome of this game. After lengthy discussion, the refs decided to cancel the game, and since Pace had a 21-point lead, they were declared the winners of the game. Originally, however, all the Pace players who were ejected during the game were declared suspended for their playoff game against Greater Atlanta Christian, leaving only 11 players eligible for this Friday’s game.

Pace appealed, and after review, GHSA agreed to lift the suspension on all but four players. As of Nov. 10, the Knights coaches have not yet revealed who has been suspended for the playoff game.