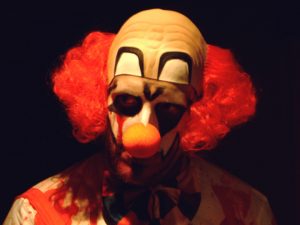 Even though Halloween was 11 days ago, some people are still holding onto the spooky holiday spirit. These people dress up as clowns and wander through the streets at night, just like the average trick-or-treater on Halloween; however, they are no ordinary trick-or-treaters. These clowns, dubbed the “killer clowns,” amble through streets throughout the world, night and day. This clown frenzy is not new, but it seems to be more widespread recently.

While this may seem alarming to most people, some people are fascinated by the people behind the masks. “I do not believe that the people are actually going to hurt anybody if given the opportunity,” said junior Graeme Davidson. “I actually think what they are doing is very amusing.” In fact, some people have become so obsessed with the “killer clowns” that they actually attempt to contact the clowns through social media, giving the clowns suggestions as to what cities and states they should pursue next.

People have even created a type of game involving the killer clowns called “clown hunting.” Basically, people gather into groups of about two to five people and drive or walk around the streets searching for clowns. “I went clown hunting with my friends once,” said sophomore Nate Robinson. “We only went for about 30 minutes before we gave up. We did not see any clowns.” Some people who are “fortunate” enough to run into a clown during their hunt take videos of their interactions and post them to social media. In a lot of the videos, some people actually are brave enough to get out of their cars, strike the clown with an object such as a bat and get back into their car, driving away like nothing happened.

Some clowns have begun to trespass onto people’s property. Many videos have been posted to social media of residents’ security cameras catching clowns. The footage shows clowns looking through windows, trying to open doors, going into backyards and even picking up and moving stuff on porches. “I am worried that I am going to wake up in the middle of the night and see a clown staring at me through my window,” said junior Hannah Schrager. “I do not even know what I would do. I think I would be too scared to even scream.”

Local Atlanta-area schools have also been affected by the ‘killer clowns.” Clown sightings in local districts have forced schools, like Grady High School, into lockdowns. In Grady’s case, there had been several reports of clown sightings leading up to Tuesday, Oct. 4, when the school ultimately declared a “soft lockdown.” Grady was able to tweet that everyone was safe shortly after declaring the lockdown.