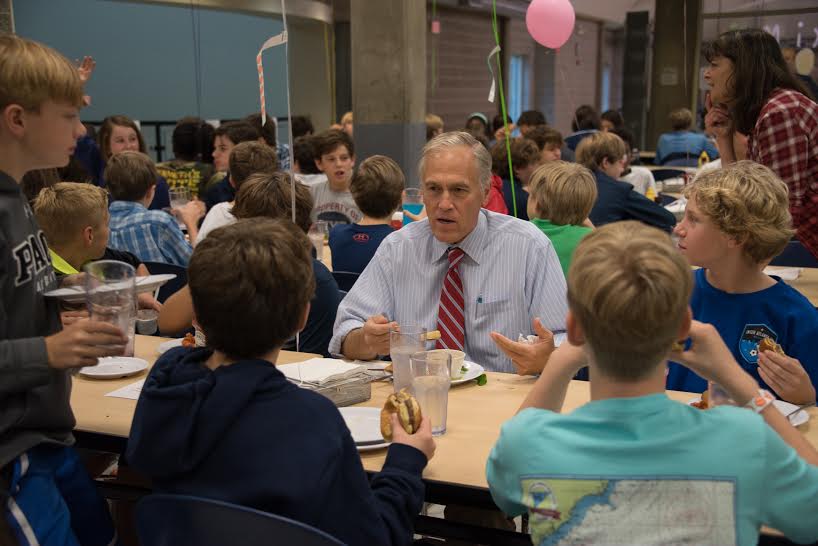 Students will remember Head of Middle School John Anderson for his famous line, “it’s a great day to learn,” and his love of literature, education and Pace students. Head of School Fred Assaf recently announced that the beloved Mr. Anderson will not be returning to Pace Academy next year. “I promise it is not because of sudden cravings for shuffleboard, Bingo and naps,” said Mr. Anderson in a letter to the Pace community, “It is simply because I know deep down that it is time. Pace is so very strong with shared, multi-layered leadership and with a clear pathway for the future.”

The first person he told was Mr. Assaf, whose first hire was Mr. Anderson. “The thought of our school without him breaks my heart,” said Mr. Assaf in his letter announcing Mr. Anderson’s retirement. “At the same time, I’m thrilled for John and his family and the opportunities their post-Pace future holds.” Mr. Anderson will now be able to spend much needed time with his wife, focusing on his music, following his dreams and making a difference in the world with his charity work.

Mr. Anderson has been working at Pace for 12 years and has been an educator for 41. When he arrived at Pace in 2005, a year after the Middle School opened, Mr. Anderson’s goal was to “unencumber talented Pace teachers to make full use of their gifts for the guidance of children.” He is proud of the teamwork involved in achieving the best experience for his students. “[My greatest accomplishment was] probably my very first one, putting recess into the schedule,” said Mr. Anderson, “Also, I’ve been very fortunate in the hiring of great middle school teachers. They are the best I’ve ever had the privilege of working with, experts in their fields, but also understanding of the middle-school-aged kid.

Even though it was his choice to retire, leaving is rarely easy for someone like Mr. Anderson who has devoted his life to educating young people. “Part of me is already in mourning about missing my kids,” said Mr. Anderson. “I just love them, no other way to say it. I’ll miss my colleagues too, who are also my friends.” Students will miss him as well. “Mr. Anderson was in my life as an educator for three years, and every year I was astounded by his generosity and interest in the individual students,” said sophomore Charlie Warren. “I’m happy for him, but also heartbroken for the kids going to the Pace Middle School who won’t be able to experience his astonishing guidance while going through middle school.”