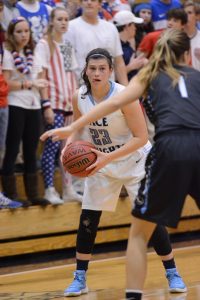 For many, Pace basketball is one of the most anticipated sports of the year and it often lives up to its expectations. The Inman Center gym is typically packed full with fans from the home and visitor teams to watch dunks and buzzer beaters. Although the girls basketball team doesn’t dunk and it doesn’t draw a crowd quite like the boys team, it can still excite the spectators.

This year’s girls basketball team will have a mix of well-seasoned veterans and fresh faces. This includes ten returning players along with an influx of new players. Most of these new players are freshmen, except for junior Molly Shapiro and sophomore Madeline Janki. Madeline returned to Atlanta after moving to Connecticut two years ago, and Molly took the fall semester last year to go to school abroad at the Alzar School. Molly wasn’t able to join the team in time last year, but she was a member of the team her freshman year.

Although the freshmen are new to the scene, they’re not to be underestimated. Freshmen Virginia Hobbs and Jordan Upchurch are two new players to keep an eye out for, and they both have considerable experience under their belts. Both Virginia and Jordan have been playing for a club basketball team outside of school for six and four years, respectively. But even with all their experience, they’re still nervous and excited for the varsity scene. “I’m a little nervous for tryouts, but mostly excited for the chance to be a part of Pace basketball,” said Jordan.

Pace Athletic Director and girls varsity basketball head coach Troy Baker will be making some changes this season. According to Coach Baker, the varsity and junior varsity teams will be divided better concerning practice times, with separate practices so that the teams will be less distracted and more devoted to the play at hand. “Last year was more about keeping the Pace basketball culture going and creating positive energy,” he said. The 2015 season was Dr. Baker’s first season as the team’s head coach. Dr. Baker is excited to get back with the team and see the combination of new and returning players, but mainly to work hard with the girls so the team can hit the ground running the first game.

Coach Baker is making some changes with the tournament schedule. For instance, the team won’t be participating in the Westminster Schools Holiday Classic but instead will be playing in the Campbell High School Christmas Tournament. The Independent School Showcase at Wesleyan is also a new tournament added to the schedule in December.

Players report that the team’s chemistry is instant, and it can be seen on the court. “Our pre-game rituals and post-game celebrations contribute to making one of the most close knit teams I’ve ever played on,” said senior Julia Ross. The relationships developed within the team have translated to games because the girls have learned to communicate on the court and play as a unit, instead of as five individuals.

The girls are eager to get back on the court to get the season started, and they will be playing a scrimmage away at Fellowship Christian School on Nov. 12. The first home game of the season will be against Providence Christian Academy on Nov. 15.