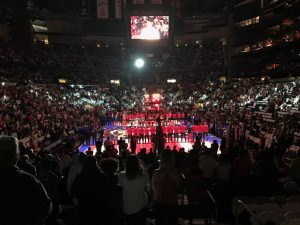 The Atlanta Hawks are back in action as the NBA regular season is underway. After finishing 48-34 last season and getting swept once again by the Cleveland Cavaliers in the Eastern Conference Semifinals, Hawks management decided to shake things up.

In order to make Dennis Schröder the new starting point guard, they traded Jeff Teague to the Indiana Pacers for the 14th pick in the draft, which yielded Taurean Prince. They signed Dwight Howard, an Atlanta native and an eight-time All-Star, to replace departing center Al Horford.

Though these moves have generated buzz around the NBA, the excitement hasn’t spread to the Pace community. In a recent Knightly News survey, only 54.8% of Pace students responding cited the Hawks as their favorite team, while 71% of students think that there is no way the Hawks win more than 50 games this year. Only 9.7% of students claim Dwight Howard as their favorite player, but 67.7% of students do feel like picking him up was the right move, with 12.9% saying it was the best move made by the franchise in the last decade.

Kyle Korver had the most votes for Pace’s favorite player, with Dennis Schröder coming in second and Paul Millsap in third. With the season around the corner, Atlanta Hawks coach Mike Budenholzer looks to put the final touches on a team that has a real chance to make some noise in the Eastern Conference this year. If Dwight Howard regains some old magic from his all-star campaigns and Dennis Schröder effectively transitions into a starting point guard, the Hawks could be back in the Eastern Conference finals for the second time in the past three years.