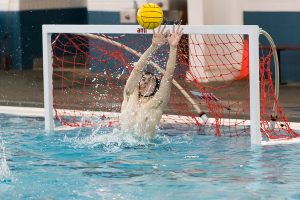 Harris Greenbaum makes a save during a water polo game. Photo: Ashford Little

The Pace water polo team nears the end of the season with a record of seven wins, four losses and one tie. This record includes an astonishing 133 goals in just 12 games. Coach John Ague, a long-time physical education teacher and swimming, soccer and water polo coach, has guided the team to a 3rd place division ranking and a 1oth place state ranking.

“I am overwhelmed with our improvement,” said Coach Ague. “On paper, we have surpassed what we anticipated what this year’s team could be. We can make a splash in the tournament.” Water Polo is considered a club and not a varsity and GHSA sport, but the team operates like a varsity program. They have been an exceptional team throughout the last five years and the team members, due to the toughness of competition, treat it like a varsity sport. They headed off to the state tournament on Oct. 8 as this issue went to press.

“I think the season has gone really well and we’ve surprised ourselves and the rest of the division with how well we’ve played, especially on defense,” said senior Mcrae Oglesby, who has been playing water polo since freshman year. “We have outdone what I thought we could accomplish this season,” said Coach Ague. The team graduated their four-year goalie and other key starters, while only two full-time players returning to this year’s team. According to Coach Ague, they have used three different players in goal, while working hard to do basics really well and getting the new players introduced to the game.

The new additions to the team, eighth grader Amalie Little and freshmen Dillon Carroll, Harris Greenbaum, Jackson Hamel, Rachel Kann, Blake Maner and Harrison Saini, “have provided a much needed depth to [the] roster and continued to improve during the season,” according to sophomore Andrew Jenkins. Amalie, the only eighth grader on the team, likes “how water polo includes almost every skill: strength, speed, aim, teamwork and ingenuity. Everyone has a chance at different types of success, i.e. you can score on defense and you can defend on offense.”

The captain of the water polo team this year is senior Mitchell Zwecker. As captain in water polo, he not only has regular captain duties, such as leading warmups and being a leader in games, but serves as a mentor to the rookie players because of the loss of four seniors and one other player last year, and the inexperience of the squad. “I am teaching the rookies the basics and to even some of the veteran players, I am teaching them new skills,” said Mitchell. “I love being able to lead my amazing team of guys and girls in the sport that I love.”

Some players believe that the only thing the team needs to improve their record, is to build everyone’s individual play and team collaboration. “As a team, we really just need to raise the overall experience level, because we have lots of first-year players,” said Andrew. “Our new players need to be exposed to some of the more technical and nuanced aspects of the game, as well as really setting up on offense and playing “real” water polo versus just fast breaking,” said Mitchell.

On Senior Night on Sept. 20, the team fought against the Westminster Wildcats, the best team in their division. They played them earlier in the season but the match resulted in a tie. Seeking to redeem themselves, the Pace team “corrected many of the mistakes [they] made that last game and came out and ‘put on a clinic,’ you could say, to dominate the game,” according to Mitchell. Pace was winning 7-3 by the 4th quarter, but the team lost the game “because of some of the worst reffing I’ve ever seen, but it was amazing to see the team come together like that,” he added.

Out of the seven players in the pool, four are seniors, which the team fears will hurt them a lot next year. But they believe with good coaching and teamwork the team can pull through. “Next year the team will have new starts who are less experienced,” said Amalie. “We can recover, though. Some people do not consider water polo a real sport but we could really use the help because it’s an amazing sport to me and many others.”