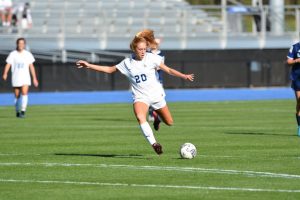 Although she’s only a sophomore, Hannah White, ranked number seven in Georgia as a soccer player, already knows where she’s going to college. College recruiters have had their eyes on her as she dominates her soccer tournaments. She’s received offers from many different schools, but she narrowed it down to Notre Dame, Georgia, Michigan and University of Southern California. She ended up committing to the USC Trojans. “I like the weather, I love the coaches and I just love California,” said Hannah.

Hannah is a member of the Tophat soccer club on the ECNL (Elite Clubs National League) team. She started playing soccer when she was only four years old and has played at Tophat for the past six years. Before playing at Tophat soccer club, she played at a different club called SSA. She has always played on the top team of her club wherever she plays, and has never played another sport competitively. “I didn’t really have a choice,” said Hannah. “My parents just made me.”

Sophomore Regan Bates has been playing soccer with Hannah for the past four years at Tophat. “Hannah is a great team player,” said Regan. “She passes a lot and always looks to give her teammates opportunities to make good plays.” As the top offensive player on the team, Hannah is a dominating forward, scoring most of the team’s goals. “I think Hannah will have a very successful soccer career,“ said Regan. “If she sticks with it, she could even make it to the Olympics one day. As her teammate and her friend, I’m very proud of her.”

“Hannah is very instrumental in our success,” said Pace varsity girls soccer coach Liz Tutt. “She is a very knowledgeable player with a very high soccer IQ because of her experience, and she’s very aggressive so she’s always either creating opportunities for us or finishing opportunities.”

Receiving the rising star award last year, Hannah proved worthy of her spot as a starter on the experienced Pace varsity team that won the state championship in 2015. “Hannah acclimated right away and became a very valuable member and starter in the game,” said Coach Tutt. “For a freshman, that’s an amazing accomplishment.” According to Coach Tutt, Hannah is very good at taking the ball away from the opponent and then distributing it, making her an adept team player.

“I think Hannah’s going to do great,” said Coach Tutt. “If she wants to go pro, she’ll have the opportunity to do that. I see her taking it as far as it’ll go.”