Pace Theatre Taps Back to the Roaring Twenties 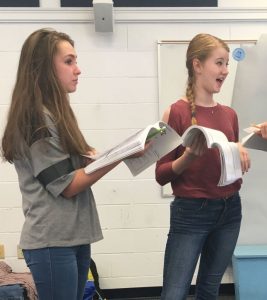 Speakeasies, flappers, electrifying jazz and a thrilling whirlwind of a plot. Pace Theatre is bringing to audiences a fast-paced musical from the roaring ’20s, “Thoroughly Modern Millie,” opening Nov. 10. The classic premiered on the screen in 1967 and debuted on Broadway in 2002, winning six Tony Awards, including one for Best Musical. Miss Millie Dillmount, a country girl who moves to New York City, carries the audience through her experiences in the bustling urban frontier. The show introduces characters from Kansas to China. “What’s great about this show is that it has a lot of strong female parts,” said Director Sean Paul Bryan.

Played by theatre veteran and senior Ellie Duncan, the show’s star Millie is pragmatic and brave, yet still apprehensive in her new surroundings. A possible love interest for Millie, banker Trevor Graydon III, hires Millie to be a stenographer in his modern office. Junior Cole McCorkle plays Mr. Graydon. “I am so excited to be a part of this show,” said Cole. “We are a team and I love being a contributor. The show is hard, but it’s fast and engaging.”

The cast consists of upper school students in every grade. Unlike some varsity sports, all high schoolers can bond together and they have been preparing since August for the show’s opening. Joining the theatre team is Ms. Eileen Edwards, an eccentric and experienced choreographer. “There is some wonderful dance,” said Mr. Bryan. “I wanted to challenge the cast. I wanted them to step up… literally.”

With the show’s strong jazz theme, many dance numbers have complicated tap dances, which is a new challenge for many of the actors. Ms. Edwards is well-versed in teaching even the most novice of dancers. Cast members are learning jazz keys and harmonies, tap and jazz-style dancing, as well as the atmosphere of the time period, characterized by prosperity, innovation and artistic expression.

Freshman Austin Fuller plays Ira the piano man, among other roles. “I find it interesting to see how life was back then,” he said. “They thought they were so modern and revolutionary.” The show is an adventure back in time, to the shining 1920s in New York City and one young woman’s desperate quest for love and fortune. “It’s got the feel of a classic musical with a modern sensibility,” said Mr. Bryan. “Thoroughly Modern Millie” will run Nov. 10-13 with four performances.