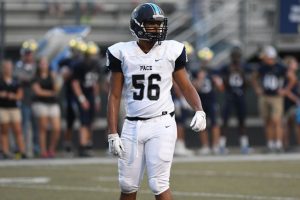 The Pace Academy varsity football team lost many key linemen with the graduation of the Class of 2016. Although the loss of those players was devastating for the team, they have been able to recover well. Sophomore Cameron Hamilton, junior Justin Morris and many players who traditionally did not play offensive line stepped up this year to play. Junior Juston Cogbill, new to Pace this year, has reinforced the strength of the team’s line even more. “I had the best offensive line in the state of Georgia last year,” said junior quarterback Gunnor Faulk. “This year I feel just as confident about them because of players who are stepping up like Juston.”

Juston spent two years at Lassiter High School playing defensive end. Coming from Lassiter, Juston is having a vastly different experience playing football at Pace. Now he plays right tackle on offense as well as defensive end. “On the first day of practice the coaches told me that I am playing right tackle,” said Juston, “I was shocked because I had only played defense in the past.” Another huge difference is the overall team relationship. Lassiter’s football team last year had over 140 players and not everyone knew each other. “I know every single person on the team regardless of their position or grade,” said Juston, “I can wholeheartedly say that I feel like the team is a family.”

The pressure is immense for Juston at Pace on the field and in the classroom. At Lassiter, Juston had seven classes every day and no free periods. “Pace is significantly harder than Lassiter but I have the ARC [Academic Research Center] and my teachers to help me succeed,” he said.

The environment on the field, however, is also challenging. “The players are faced with this pressure and these expectations because of [Head Coach Chris] Slade, who played at the professional level,” said Kevin Johnson, head offensive line coach. The coaches add to this pressure since they work with the players closely the entire summer and monitor their success during games. “I get to see these players develop as humans and as players and it helps you understand the amount of work that these players put in,” said Coach Johnson. “Improving performance leads to winning, which leads to fun and self-satisfaction.”

Going into this year’s football season, Pace was ranked number one in AAA. “My favorite game was actually Thomson, because it was an eye-opening experience since it didn’t really feel like we were a team deserving of the number one rank,” said Juston.

Juston is loving Pace so far despite all of the pressure on and off the field. “Pace has helped me evolve as a player and that is something that will help me in the long run,” he said.